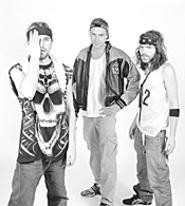 Guitarist Matthew McAuley is riding in a tour van with his two A.R.E. Weapons bandmates, just talking about New York City. That's how he arrived at the perfect nutshell for his band.

"New York is a magnet for every fucking puke who thinks he has the greatest idea in the world, so he rolls there to fucking prove it," he says. "And here's three of them right here."

A.R.E. Weapons are the least housebroken of a seemingly ceaseless wave of New York bands mining the late '70s and early '80s for a very superficial, very alluring aesthetic and sound. Count among their image-obsessed colleagues the Strokes (with whom they're friends), disco punks the Rapture, Joy Division channelers Interpol, and electro-revivalists Fischerspooner.

And what's the greatest idea in the world that these Boston transplants brought to the Apple? Basically, that being a kid is harder than adults remember, being a ne'er-do-well sleazebag is virtuous, and "Life is meant to be awesome," according to a line from the slacker anthem "Don't Be Scared," on the band's self-titled debut. Oh, and that buying lots of cheap drugs is better than saving up for a few high-quality ones. (They might say the same about music equipment.) Not novel concepts by any stretch, but the Weapons' saving grace is the sincerity with which they deliver their utterly banal message.

Take other lines from "Don't Be Scared," for instance. Vocalist Brain McPeck, who unabashedly has a thing for Lou Reed, offers encouragement to kids bumbling through life "crashing on couches" and "sucking dick" -- which, sure, they need to hear, but rock's been celebrating such pastimes forever. What's cool about McPeck is the way he gives support. He empathizes. "People think you're a loser, a drug abuser, because you like to get high/Well, that's all right, Bobby/So do I!" He has an uncanny ability to be totally, completely sincere while being cheeky and ironic. McAuley, who has been playing in bands with McPeck since junior high, denies the novelty-act tag. "It's got fucking humor in it, but it's deadly serious," he says. (Both he and McPeck use the F word as often as punctuation.) "Yeah, it's not a joke at all."

The whole funny-yet-serious thing, coupled with the occasional adolescent rap verse and the wide-eyed extolling of all things downtown, has prompted critics to compare the band with early Beastie Boys. McAuley concurs. "I feel that comparison as a compliment, as long as when they're saying 'early,' they're talking about Licensed to Ill and not anything else. Yeah, back in the day, those guys had a cool sound, and I loved the shit out of that record when I was 11 years old. But it's definitely not a conscious influence. We're not from New York originally, but probably grew up in the same circumstances that they were living in when they made that record -- living in a city, fucking freaking out, having fun with a bunch of friends, get fucking wasted, enjoying life."

The names of other bands fall often from the pens of writers trying to pigeonhole the Weapons. Suicide is chief among them, particularly the gritty synth duo's 1978 debut, with its thin electronic sound and infatuation with all things downtrodden and urban. The Weapons themselves, perhaps amplified with the help of a publicist, describe their music as "RZA producing Buck Cherry in Gary Numan's studio." (An intriguing proposal, but not an accurate description of their sound. The RZA would never be caught slumming with such cheap production values.) Then there's the frequent lumping-in with electroclash, the much-ballyhooed yet still underselling Next Big Thing, consisting of punks with drum machines. McAuley says not to get too caught up in the name game. "Everybody's got influences, but the trick is steal shit, make it your own, and fucking cover it up."

The debate rages about whether the Weapons have done a good enough job of covering their tracks. Some reviewers have grumbled that the album, released on Rough Trade, isn't more than the sum of its parts, that it's too easily reducible to the equation (Beastie Boys + Lou Reed) x Suicide.

Agreed, the ingredients are clearly marked on the package, but they are particularly tasty ones, and in the case of Suicide, fairly rare -- the seminal band has never gotten its due. To these ears, there is a synthesis that takes A.R.E. Weapons, and the bottom line is that it's a damn fun record. There's a song that glamorizes gang life ("Street Gangs"), but not the automatic firearms and crack-cocaine variety, but the much more cuddly chains, leather jackets, and mugging kind.

Behind the sneer, this is a cute record, and the interaction of the guitar and fuzzed-up keyboards makes for riffing not yet heard from the electro-punk scene.

Also refreshing is that the band members believe what they're saying. In fact, McPeck and McAuley have taken Suicide's broke, Lower East Side tenement vibe so far as to share one 5-by-13-foot room. But, they say, the whole destitution thing is not just part of the aesthetic or any spartan adherence to small-label budgets.

To those ends, A.R.E. Weapons are in "hot fucking pursuit" of a major-label deal, as McAuley puts it. The band was signed to Rough Trade for only one album -- a deal, strangely enough, that was brokered by Jarvis Cocker of Pulp, a group whose sound is about as close to the Weapons as Debbie Gibson is to Slayer.

Yes, the Weapons want to be bigger than big -- a feat that, if realized, would require a significant bend in the pop time-space continuum. This stuff is catchy, but it's sleazy and busted in a way that simply doesn't translate to a large market -- the Strokes are retro and a tiny bit quirky, but there isn't a rough edge anywhere in the music. The Weapons sometimes brawl with audiences and occasionally do magazine interviews on bad acid.

"Yeah, world domination is the goal; we'll see how fucking far we get," McAuley says. The plan's a simple one: "Put out another record, tour like mad, and let the world fall in love with us as we fall in love with it, or stupid shit like that."