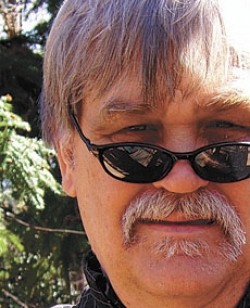 Col. Bruce Hampton Singer-guitaristEven though his 1971 album Music to Eat is notorious for being the second-worst-selling album in Columbia Records history, jam-band man Col. Bruce Hampton has soldiered on, playing with an array of different musicians (his current group is called the Quark Alliance) and collaborating with many of the bands he's befriended over the years (in particular, he's tight with the Allman Brothers and Widespread Panic). We recently phoned him at his Atlanta home, where he was prepping for a Midwest tour that includes a stop at Wilbert's and a spot at the Detroit Jazz Festival. How's your health these days?

I give it about an eight. I know more about [heart problems] than anybody. It's all hereditary, dealing with the heart. I'm thankful to be here. Nothing matters anymore. Every day is a gift. I don't have a good attitude or bad attitude; I just have an attitude. We don't know the other alternative [to death].

Do you hear anything new these days?

I love the Campbell Brothers - the gospel group. They invented the [sacred] pedal steel. I guess Robert [Randolph] made it popular, but they're real underground. These guys are it. I don't hear much right now. I don't play the radio. If I'm at a festival, I might hear somebody.

It's not like anyone has taken your late friend Frank Zappa's spot. He was an original.

Plus, he was a wonderful human being. There won't be another one like him. It ain't gonna happen. I heard Dweezil [Zappa]'s band, and the first time, they didn't have it together. But we played with them recently at Rothbury, Michigan, and they were unbelievable. They were great. I would love to hear them with some of Zappa's original musicians, but they had it together They must have worked their asses off. I admire Dweezil.

What's the status of Basically Frightened?

It's a documentary film about me. I like the way it turned out, pretty much. I tried to stay away from it. I would like to show the more insane side of everything, but the editor tried to make me look like a human. I don't know if that's good or bad. It should be out in four to six months. It's seven years long, so it's been a frustrating grind. But it looks pretty good, and there are lots of folks in it.

Any footage of you playing a chain saw?

No, unfortunately. There's nothing in the film from before 1975. That happened when we opened for Fleetwood Mac or Three Dog Night - I can't remember which. I played it in the key of C. We were definitely thrown off the bill.

Do you know a bit of magic?

I've studied some tricks. I know all the tricks of the trade. I know how everybody does everything. Today, they are so good. They spend so much money, but I know the premise for every magic trick. There's not one that's fooled me yet. David Copperfield is all mirrors. You're looking at two million dollars worth of mirrors and 40 people helping him. That guy works 340 days a year. He makes more money than they can print. But what an empty life.

Your current band is called the Quark Alliance. Would you say it's a little more blues- and jazz-oriented than other projects?

Yeah, sort of. We play a lot with Grant Green Jr. We have a Toledo, Ohio native, named Ike Stubblefield, who plays organ with us a little bit. We have about 70 tunes. It's original tunes and bluegrass. I like everything that is pure American music.

You've been playing for some 45 years. What keeps you going?

OK, here's what it is. Being on the road is brutal, and dealing with everything is brutal. Twice a year that magic happens that comes from nowhere. You can't repeat it ever again. That's 99 percent of what keeps me going. Just that magic moment of going, "God, what was that?" You know you're not part of it; you're just part of the flow or the Zen of it. It's like hitting a triple. You can't foresee hitting a triple. It's just one of those fluke things that happens.