But his blues are dirtier than ever. 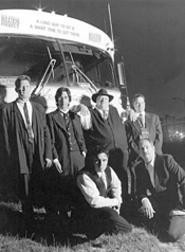 Colin Dussault put away the booze for good a couple of years ago -- a good move for a guy who could polish off a bottle of Rumplemintz or Jaegermeister in one sitting. "I'd wonder why I was always sick, why my voice was gone, and why I couldn't sing," the 34-year-old bluesman says. After two years of sobriety, he says, he's never sounded better. This weekend, Colin Dussault's Blues Project lays down tracks for a new album at a live recording session at the Savannah Bar & Grille. "The studio, to me, is so confining and restrictive," he says. "I can't feel [the music], and I need to feel it."

Dussault's band, a legend on the Cleveland scene, has released three CDs in the last decade; the upcoming live disc is due in November. "I am not Pink Floyd, and we're not trying to re-create Sgt. Pepper's," he says. "We are just a good-time live band." Colin Dussault's Blues Project's CD Recording Party is at 8 p.m. Saturday at the Savannah, 30676 Detroit Road in Westlake. Admission is $3; call 440-892-2266. -- Cris Glaser

Sing Along With Brionna

Ubiquitous Cleveland drag queen Brionna Brooks has another entry for her résumé: She's hosting Karaoke Star Search every Monday night at Union Station, the gay martini bar and restaurant companion to Bounce and Pump. Step up to the mic for a chance to win the $50 cash prize at stake each week; at the end of the month, the four weekly winners square off in a $100 winner-take-all battle. If you can't sing, you're still in luck. Monday is two-for-one night: Buy an entrée, and your companion gets another one free. Karaoke Star Search is at 10 p.m. Mondays at Union Station Video Café, 2814 Detroit Avenue. Admission is free. Call 216-357-2997 for more information. -- Cris Glaser

Talk Dirty to Him

Poison is in town tonight for a concert at Blossom Music Center, and singer Bret Michaels (right) will spend the afternoon at the Rock and Roll Hall of Fame and Museum, presenting the guitar he strummed in the band's "Every Rose Has Its Thorn" video. Buy a copy of Michaels's new Songs of Life album, and he'll sign it on the spot at the Rock Hall's FYE store. It starts at 3 p.m. at the Rock Hall (1 Key Plaza); call 216-515-1930 for more information. -- Michael Gallucci

On Passion & Pain, Akron rockers Crimson Rain make riff-heavy tunes that aren't reluctant to embrace a pop melody. They sound a little like Bon Jovi -- without that band's Springsteen fixation. They're at the Hi-Fi Club & Grille, 11729 Detroit Avenue in Lakewood at 11 p.m. Tickets are $8; call 216-521-8878. -- Michael Gallucci