With Econoline Crush and Swim. Friday, May 11, at Nautica Stage. 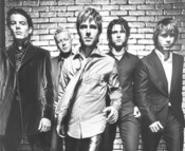 We're assuming Blender, the title of Collective Soul's fifth album, refers to the mixture of styles swirling around the center of it. Where else can one find quasi-funky dance tracks, hard rock escapades, a cover of Morphine's "You Speak My Language," and a duet with Elton John? Certainly not on the new Ginuwine record, that's for sure. Why exactly this former hard-rockin' Atlanta quintet chose to turn its latest album into an electronics-heavy pop affair is as much of a head-scratcher as its reasons for replicating the aforementioned Morphine tune almost note for note. Perhaps it's meant to complement the band's new glamour style or make these guys more MTV- and chart-friendly. Whatever the reasons for the shift, the bland and powerless Blender rarely justifies the move. Despite the studio-generated sound, Blender is relatively uncomplicated -- though there are still plenty of chugging guitar riffs and much strained artiness in the grooves. Many of the songs sound rushed and tossed-off, as if years of playing "Shine" and "December" demanded something less fussy this time around. And for a band that inexplicably has sustained a career on rock radio, there's very little rockin' to be found in the popular songs. Blender is all programmed drums and canned production. The new-millennium makeover pretty much dusted off these boys and polished them into gleaming paradigms of style. They're so sleek, in fact, that even the snooty John lends his piano and voice to one of the new songs. Let's just say that Sir Elton's much-hyped Grammy duet with Eminem had more presence and purpose than his name-dropping appearance here.