Three recluses form an unlikely bond in The Station Agent. 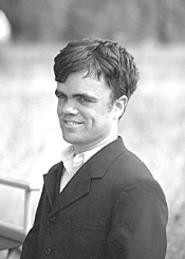 A humorous and touching tale about unexpected friendship, The Station Agent marks the auspicious writing and directorial debut of an actor named Tom McCarthy. It concerns three people who have absolutely nothing in common, except for the solitary life that each leads. For Finbar McBride (Peter Dinklage) and Olivia Harris (Patricia Clarkson), being alone is a choice, but one brought about by adversity and sorrow.

Fin is a dwarf, ostracized and ridiculed by an insensitive world. An intelligent and attractive man, he is resigned to the constant stares, snickers and comments, although it's clear they all hurt. He maintains his dignity by avoiding other people. Antisocial to the point of rudeness, he has only one friend, the owner of the model shop where he works repairing toy trains. The owner dies, leaving Fin a dilapidated one-room train depot that sits on a half-acre of land in an unpopulated corner of New Jersey. It's the perfect place to hide from the world.

But even the best-laid plans have a way of unraveling. His first day in his new home, Fin runs into Joe Oramas (Bobby Cannavale), a lonely and garrulous coffee vendor whose truck stand is located a stone's throw from the depot. Joe is starved for companionship and keeps trying to engage the reluctant Fin in conversation.

Fin meets Olivia when her car nearly runs him down as he walks along the road -- not once, but two times. An artist who has shut out the world after a personal tragedy, she frequents Joe's coffee stand, but resists the owner's repeated attempts to engage her in conversation. Only her guilt over having nearly twice killed Fin propels her to seek him out to apologize, and he clearly wants even less to do with her.

These three isolated individuals could not be more dissimilar, yet over time -- and despite Fin and Olivia's best efforts not to -- they gradually start to form a bond. It is the slow development of this bond -- as well as the situations that continually threaten to derail it -- that constitutes the heart of the film. And it is one single image, which pops up about 40 minutes into this compact, 90-minute film, that captures its soul. It's a side view of Fin, walking down the middle of a railroad track, followed a few paces back by Joe. A couple of seconds go by and Olivia marches into view, single file behind Joe. It suggests the film's theme of "being alone together" simply and absolutely to perfection.

The Station Agent is beautifully structured and paced throughout, revealing underlying levels of both humor and pain. From the beginning, Olivia and Joe see Fin as a person, not as a dwarf, and they never treat him as anything less or different. That in itself is rare in Fin's world, as is evidenced by his encounters with other townspeople.

Part of the film's humor derives from the fact that, despite Fin's strenuous efforts not to acquire friends, people keep confiding in him. This includes not only Olivia and Joe, but also Emily, who works at the town library (Michelle Williams, who, since leaving TV's Dawson's Creek, has proved herself to be a very talented actress), and elementary school student Cleo (Raven Goodwin, the little girl from Lovely and Amazing), who, responding only to Fin's height, asks him, "What grade are you in?"

The actors are all marvelous. Clarkson, who is finally being recognized as the great character actress that she is, won a Special Jury Prize for Outstanding Performance at the 2003 Sundance Film Festival for her role in a trio of films, including this one. Cannavale makes Joe a big puppy-dog of a man, as eager for friendship as he is oblivious to other people's lack of interest in him -- but so big-hearted and genuine that you can't help but be won over. Dinklage brings an almost unimaginable mix of rigidity, shyness, resignation, sexiness and sadness to his character. Thanks to their performances, as well as to McCarthy's understated script and direction, the film walked off with both the Audience Award at the Sundance Film Festival and the Waldo Salt Screenwriting Award.