Fine dining merges with club life at Sinergy in the Warehouse District. 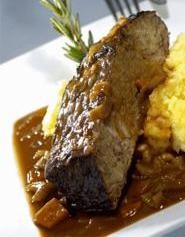 The go-go dancers start at 10:45, our black-garbed server tells us as he motions toward the tiny platforms in front of Sinergy's soaring windows. Now, though, it's only 8:30 p.m., and we'll just have to settle for the light show. This turns out not to be a bad thing. A moment later, we are watching in wonder as the white room begins to shimmer like the center of a rainbow, suffused in morphing shades of blue, indigo, violet, and gold.

The light show continues all evening, according to GM Mike Ina, even as dinner hour ends, Sinergy's tables are stowed, and Warehouse District club-hoppers take over the dance floor.

As gimmicks go, this "restaurant by day/ dance club by night" theme seems promising enough. Still, we'd be lying if we said we don't sort of miss the era when dining out was all about the food and restaurants rose and fell by virtue of the chef's talents. Today, of course, the fight for dining dollars has grown fierce, and family-friendly chains and tony independents alike try to sweeten the pot with non-food-related "extras" -- anything from plastic toys to wandering balloon clowns. Look at Tru, in Chicago, for instance, where priceless works of contemporary art transform the space into a gallery; or Morimoto, in Philly, with its color-changing tables, undulating ceilings, and white leather banquettes.

Go-go dancers aside, though, the sleek, spare Sinergy, which opened in June in the former Flo space, hasn't gone quite to those extremes. While the light show is a dazzler, the decor is a model of pared-down simplicity. In fact, the most significant decorative elements are the bar -- where backlit bottles of spirits climb the wall like a geometric sculpture -- and the floor-to-ceiling windows that, at least during daylight hours, allow striking views of the lake, the sky, and the Main Avenue Bridge.

"Simple elegance" is the kitchen's motto too, according to executive chef Todd Hargis. Formerly regional chef for the Hyde Park Group restaurants, Hargis takes his food seriously; to that end, he has put together variety-packed lunch and dinner menus, featuring beef, pork, pasta, seafood, and even several options for vegetarians, done up in styles ranging from classic Mediterranean to Caribbean and Hawaiian.

While occasional slips took our overall dining experience down a notch or two, in general Hargis and his staff are turning out smartly conceived, labor-intensive dishes filled with spot-on flavors.

That includes the don't-miss boneless short ribs, which show up on both the lunch and dinner menus. "Caramelized beef" is how Hargis describes them, and that's as honest an accounting as any for these fork-tender morsels -- seasoned, seared, then braised for four hours in a broth of veal stock, rosemary, and red wine. Together with the dark, intensely savory, veggie-studded jus, the finished beef is then ladled onto a plush tangle of al dente egg pappardelle, resulting in what is probably the best version of this popular dish you'll find anywhere in town.

An oven-roasted rack of lamb (a Friday-night special) was a jaw-dropper too, done up in classical French form with a two-step marinade and a crust of Dijon mustard, panko, rosemary, and garlic. Finished to a rosy medium rare, as ordered, the lamb could not have been more tender or adroitly seasoned; a cloud of mashed Yukon Gold spuds and a drizzle of red wine demiglace completed the plate.

Sadly, though, the lamb far outshone the other two entrées we sampled. The first, an otherwise tasty portion of lobster ravioli made by Ohio City Pasta, was plagued by bits of shell in the filling; the second, an ample filet of pistachio-crusted grouper, served with haricots verts and a dab of fruit-forward fig reduction, was overcooked and disappointingly dry.

The same unevenness showed up in the starters. Among the winners, we count a quartet of citrus-marinated prawns, slipped onto sugarcane skewers and grilled to crisp, smoky perfection; salted plantain chips and an imaginative banana-rum sauce reinforced the tropical references. And a carefully composed roasted-beet salad -- neatly arranged layers of diced red, gold, and candy-cane beets, interspersed with goat cheese and red grapefruit segments, in a pistachio vinaigrette -- was as delicious as it was good looking.

The downer, however, came in the form of the simple "strawberry and field greens salad," tossed with a mixed-berry vinaigrette. The garnishes included goat cheese, walnut bits, and a single, stingy sliced strawberry. More disturbing, though, was the condition of the greens: While most of them were crisp and wholesome, more than a few slimy, rotten leaves had slipped in. No complaints, however, about the desserts, with offerings that included gelato, fresh fruit, and an assortment of elegant sweeties from Seballos Pastries in Tremont. Whether it's a fresh-flavored "strawberry shortcake," filled with rich white-chocolate mousse, or an ample Key lime tart, pastry chef Ron Seballos hits the bull's-eye.

As it happens, we never did see the go-go dancers. But once Hargis finishes tightening up his preparations, Sinergy's diners will hardly miss them.