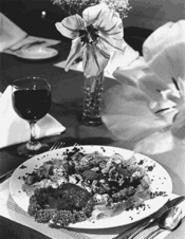 "This," said my friend George, over a Bombay Sapphire martini and a piece of veal, "is my idea of comfort food."

The two of us were sharing a weeknight dinner at the Reserve Inn, a cozy Hudson restaurant which, like the clocktower on the nearby commons and the Western Reserve Academy, is a local landmark.

Many of the old-timers in this bustling small town turned city can recite the history of the restaurant near the corner of Darrow Road and Route 303. Originally an Italian eatery, the building was purchased in 1958 by Minnie and Leo Wagner, who turned it into a friendly, casual dining spot with an emphasis on all-American foods. Although Leo passed away a few years back, he remains a palpable presence in the restaurant, not only in the handsome portrait smiling down at guests from the wall of the main dining room, but also in the popular Leo Salad, for which he was the namesake. As for Minnie, the diminutive 81-year-old with a halo of shiny white hair has retired from her official duties, although she is still an unofficial goodwill ambassador, cruising the dining room to chat with friends, both old and new, whenever the spirit moves her.

The restaurant is now in the conservative hands of the Wagners' son, Dennis, who likes to joke that he made the mistake of stepping into the kitchen at the age of 18, to see if he could do something to help, and hasn't been able to get out since. A born restaurateur, the younger Wagner has managed to keep up with the times while creating an atmosphere in which nothing ever seems to change too much.

Even a thorough interior updating, completed nearly two years ago, has left the two snug dining rooms and sheltering bar looking timelessly stylish, with a classically understated decor and fresh roses on every table. A colorful collection of leaded-glass lamps hovers over booths in the bar, where the locals gather for a late-night sandwich and a drink. And in the main dining room, New England landscapes by a local artist keep watch over the well-dressed clientele, some of whom have been coming here for almost a half-century.

Weird and wonderful little touches abound, though, creating a familiar, unpretentious feel: things like the paper placemats that guard the green table linens from unexpected splashes, and the paper coffee filters that are pressed into service as breadbasket liners. Plates -- heavy white ironstone, each banded with a garland of flowers and vines in a deep shade of pink -- look like something from a flea market. And slices of commercial, sesame-seed-coated French bread are served with a bowl of thick, old-fashioned apple butter. ("It really doesn't go with a martini," observed George, "but I always look forward to it anyway.")

All of which is not to say that the kitchen is stuck in a time warp. Wagner, along with his staff, constantly tinkers with the menu, adding some contemporary items and paring away the less popular ones. Many of the kitchen's more adventurous offerings show up as Saturday night specials, like a delicious appetizer of trendy wonton-wrapped shrimp inexplicably dubbed Shrimp Wellington. I admit that we cringed a little when we spotted the bright pink sauce beneath our five golden brown, medium-sized shrimp. But although the concoction -- mostly a blend of cream cheese and pepper jelly -- looked like frosting, its rich flavor and mellow heat made a great go-with for the crunchy, light, and perfectly prepared seafood.

A classic starter from the regular menu, French Onion Soup was also done up just right -- rich and savory, with lots of cheese, a thick, not-too-salty beef broth, and plenty of tender, almost caramelized onions. And an entrée special of fresh salmon showed an equally deft touch: Broiled to a still-moist degree of doneness, slathered with an unassuming butter sauce, and sided with a wedge of lemon, the thick filet was simple, tasty, and attentively prepared.

Despite the menu's more recent emphasis on fish and seafood, steaks and chops are still among the restaurant's most popular offerings. A modest Boston strip steak -- the Reserve Inn Special -- was done as ordered to medium rare and was juicy and well-seasoned, if not quite up to downtown steakhouse standards of tenderness. A Saturday night prime rib special was a generous cut of well-marbled, medium-rare beef with a wonderfully rich taste -- although again, it could have been more tender. Still, at the price -- $16.95 and $17.95, respectively -- we're not complaining.

Another house special, Veal Duvall, was a large, thin, tender filet topped with lots of sliced mushrooms, a few bits of artichoke hearts, and a light, sherry-scented demi-glacé. Although a bit on the salty side, the dish was satisfying and full of flavor. As for pasta alternatives, we found a real winner in Pasta Gina: a big bowl of wide, fresh basil-and-black-pepper fettuccine noodles tossed with plenty of juicy chicken breast strips, sliced black olives, roasted red pepper, crumbles of creamy feta cheese, herbs, olive oil, and a wealth of soft, sweet, and sticky roasted garlic cloves.

Entrées come with either a simple house salad or the fancified Leo Salad, which is by far the better choice. Although the salad begins humbly enough, as a mix of iceberg lettuce flecked with bits of romaine, shredded carrot, red cabbage, and radish, the toppings of freshly fried bacon bits and shredded sharp white cheddar, along with the mildly tangy dressing of aged vinegar, garlic, and salad oil, make it memorable.

Side dish choices include competently prepared but thoroughly ordinary rice pilaf, mixed vegetables, and french fries -- or the richer, more voluptuous home fries or twice-baked potato. The unusual home fries -- our current guilty pleasure -- had been assembled into a fat, round pancake and fried until irresistibly crisp and oily on the outside and meltingly moist and creamy within. And if that wasn't appealing enough, the potato patty was then topped with a mound of slowly melting white cheddar cheese. As for the twice-baked number, the filling was a cloud of light and creamy whipped potato, topped with melted Cheddar cheese and served with sour cream on the side. ("Which side would you like it on?" deadpanned our motherly waitress-turned-comedienne to one night's befuddled teenage companion. But we accepted the ribbing in good humor. While it is true that the Reserve Inn's serving staff includes people of both sexes and all ages, it is the mature, maternal waitresses that we prefer. Like our grandmas, they call us "Dear," tease us gently, and inquire about our plans for the evening -- all the while bringing our food, filling our water glasses, and keeping us afloat in an endless stream of iced tea refills, even on a hectic Saturday night.)

The staffers also keep a little secret: Although you'll look in vain for it on the menu, the Reserve Inn makes some of the best pizza around. Dennis Wagner calls it "backdoor pizza," since residents have been known to call in an order, drive over in their PJs, and pick up the goods from the restaurant's rear entry, without ever setting foot in the dining room. (While Wagner prefers to sell the pizza for carryout only, he will tolerate seeing it served in the dining room on weeknights or after 9 p.m. on weekends.) Our mouths are still watering from memories of the perfect little pizza pies that we ordered "to go" near the end of one of our meals: a "white" pizza with plenty of cheese, roasted red peppers, and sliced artichoke hearts; and a tomato-sauced number with generously applied black olives and pepperoni, both on thick, but surprisingly light and savory, crusts.

Desserts at the Reserve Inn are mostly the standard commercial offerings, including Granny Smith Apple Pie and Bourbon-Pecan Pie, which actually turned out to taste pretty good when warmed up and served à la mode. The kitchen also produces a good-looking crème brûlée, although by the time we got around to ordering it, the evening's allotment was sold out. But the real treat is the luscious Ho-Ho Cake, made by hostess Diane Topper (which, as George pointed out, obviously makes it a hostess Ho-Ho). Layers of moist chocolate cake interspersed with a creamy white filling (too sturdy for whipped cream, too rich for marshmallow topping, its identity is a closely guarded secret) and frosted with a really thick blanket of fudge-like chocolate, the dessert was as sweet and satisfying as a visit to a loving childhood home.

Which more or less summarizes what may be the restaurant's ultimate charm. Just as in that archetypal family of our dreams, the authentically friendly people, reliably well-prepared food, and timelessly attractive decor here combine to make the Reserve Inn as untroubled and welcoming a dining destination as you are likely to find.