It ain't quite Fantastic, but it'll do in a pinch. 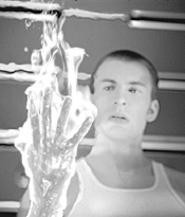 Movies based on comic books have become dime-a-dozen events -- appropriate, since the cover price of these titles was 10 cents when they debuted decades ago. It wasn't so long ago that Warner Bros. teased the release of Richard Donner's Superman by insisting, "You'll believe a man can fly"; now, you'll not only believe a man can fly, but that he can also zip through Manhattan on spiderwebs, morph into a five-story green giant, slay vampires with his blessed blade, drive his Batmobile over rooftops, stretch the length of 10 football fields, or burn with the heat of a supernova. The wonder's worn off, as heroes leap from paper pages onto computer screens and off of movie screens in the latest blockbuster of the week; nothing remains larger-than-life when there's an action figure dangling from the discount bin at Target.

So it is with Fantastic Four, the latest Marvel Comics creation to warrant its own movie (not counting the disastrous 1994 Roger Corman movie, available on bootleg and hardly worth the price of blank videotape). There's nothing epic or beautiful or stunning or fantastic about it. It's just another summer blockbuster, starring actors encased in orange latex (Michael Chiklis, naked without his Shield) and shiny armor (Julian McMahon, in need of more than a Nip/Tuck) or augmented with computer animation that allows them to stretch (Ioan Gruffudd), burn (Chris Evans), or disappear altogether (Jessica Alba, who's barely there anyway). No matter that it's based on the beloved 44-year-old title to which Marvel owes its existence, Fantastic Four is as mundane and run-of-the-mill as they come -- a summertime distraction in which things occasionally go boom, when they're not going blam.

But Fantastic Four, to the credit of its director (Barbershop's Tim Story) and writers (Michael France and Twin Peaks' Mark Frost), is a comic-book movie unashamed of its roots; it's unabashed about being silly, overwrought nonsense, which works to its benefit -- so much so that you're almost rooting for it by the end. It makes no pretense of being deep, meaningful, or solemn, and though set in New York City (as are all of Marvel's titles), it stakes no claim to existing in the Real World. That's precisely why it could even be considered a far superior comics-to-film adaptation than Christopher Nolan's turgid Batman Begins, which takes itself so seriously that it bores itself to death with speech after speech. When heroes speak in Fantastic Four, it's to crack a joke about the situations and settings in which they find themselves: "That's gross," Johnny Storm's Human Torch (Evans) says when Reed Richards' Mr. Fantastic (Gruffudd) smooshes his elasticized flesh beneath a locked door, and the audience giggles because, yeah, it kinda is.

Fantastic Four can't help but crack itself up: It's been pilfered from and parodied to death the last few years, in Pixar's wonderful The Incredibles and in an awfully mean-spirited episode of the Cartoon Network's Adult Swim offering The Venture Bros. Any movie in which characters sport the monikers Mr. Fantastic, Invisible Woman, the Human Torch, the Thing, and Doctor Doom has to smirk at itself, because what worked on paper in 1961 doesn't quite wash at the theater in 2005; wise was the decision to keep it stupid. Writer Michael France already mucked up The Hulk by pretending it was about more than a man who turns green when he gets angry; the Human Torch, a smartass more concerned with how much tail his newfound powers will get him, most definitely can't withstand the same level of psychoanalysis given Bruce Banner in Ang Lee's pompous adaptation.

This is a superhero movie in which the climactic fight scene lasts about eight minutes and looks as if it was filmed in four. Doctor Doom (McMahon), now a fifth member of Reed Richards' group of astronauts caught in and altered by a cosmic storm, is dispatched in less time than it takes to bake a pizza; he's also about as smart as the metal mask he wears for no apparent reason. Which leaves plenty of time for Story to let his cast goof around, as he fills his movie with extraneous scenes that become plot points for a movie in need of, well, story. Rather than protracted scenes of the Fantastic Four chasing Doom around Manhattan, we get glimpses instead of the Human Torch pranking a slumbering Thing, Mr. Fantastic reaching from across the hall to retrieve a roll of toilet paper, and Invisible Woman forgetting that her bra and panties aren't as see-through as she is.

No one will mistake Fantastic Four for a good movie; Spider-Man 2, Batman Returns, and Superman II it ain't (and Lord knows it doesn't warrant the Citizen Kane ending it bestows upon itself, like a stupid kid who declares himself king with a paper crown). The special effects look like they were left over from unfinished X-Men outtakes, and the acting's awful. Still, it could have been worse: Katie Holmes, after all, did to Batman what the Joker, the Penguin, Two-Face, the Scarecrow, and Catwoman never could.