Hudson gets a new hub for daring palates and deep pockets. 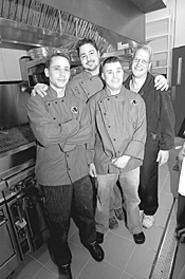 Add Vue Restaurant and Lounge to the growing culinary corridor running through affluent northern Summit County. The snazzy upscale outpost, due to open Monday, April 11, takes up prime corner footage in downtown Hudson's new First & Main development, overlooking the city's stunning new library on one side and a pretty little green on the other.

Chef-partner Gregg Korney (until recently top toque at Signature of Solon Country Club and, before that, executive chef at both Sushi Rock and Giovanni's) has developed an ambitious menu of fusion fantasies rife with trendy elements -- think porcini foam, beet sorbet, and lobster tater tots -- ripped right out of the newest edition of the Gourmand's Bible. Among the possibilities, consider a starter of polenta-crusted frog legs, with candied fennel, parsley dumplings, and roasted tomato vinaigrette ($16), or an entrée of brown-sugar-marinated salmon, with aspiration tempura and a tower of beet, goat cheese, and Fuji apples, in a rice wine and chile vinaigrette ($23). Korney also plans a late-night sushi menu, with such out-of-the-ordinary tidbits as the Duck-Duck-Goose roll, with duck confit, foie gras, brie, oranges, and caramelized onions, wrapped with duck prosciutto in an orange-ginger glaze ($16). Seballos' Pastries, whose desserts have seduced diners at many of the region's finer establishments, will provide sweet endings.

Partner Tony Colazzo, a former event coordinator for the Council on Foreign Relations in N.Y.C., will serve as GM and resident wine expert. Together with Korney, Colazzo has put together a 90-bottle list of what he calls "approachable" wines: a well-balanced collection of both the familiar and the obscure, gathered from small boutique wineries around the world, at prices ranging from the mid-$30s straight into the stratosphere.

When we stopped by for a pre-opening peek last week, construction workers were still installing flooring and running wires. Nonetheless, Korney and Colazzo say they are confident everything will be ready in time for the planned opening.

Vue will serve dinner only, Monday through Saturday; reservations can be made by calling 330-650-1883. And good news for diners who prefer the aroma of coconut-crusted mahi-mahi to the smell of Camels: The entire venue, lounge included, will be smoke-free.

Taste of spring . . . Like the buzzards' return to Hinckley or the sprouting of orange barrels along our highways, the annual Let's Get Fresh blowout for the North Union Farmers' Market is a sure sign that spring is on its way. This year's dust-up, from 6 to 9 p.m. Monday, April 11, promises to be the biggest ever, with an in-your-dreams gourmet buffet cooked up by some of the city's freshest culinarians, including Karen Small (Flying Fig), Andy Strizak (Parker's New American Bistro), Adam Gidlow (On the Rise Artisanal Bakery), Brian Doyle (World's Fare Culinary Service), and Sergio Abramoff (Sergio's on University Circle), along with another dozen or so area chefs and bakers devoted to the market's mission of supporting local farmers.

While the center of activities will be Doug "Cool" Katz's restaurant, Fire, organizers promise that nearly the entire southeast corner of Shaker Square will be canopy-covered and cozy.

Speaking of earthly delights . . . On May 16 through 20 and May 23 through 27, Parker's New American Bistro (2801 Bridge Avenue in Ohio City) will depart from its "dinner only" schedule for two weeks' worth of workday lunches, featuring the first tastes of the region's seasonal produce from chef-owner Parker Bosley's network of local farmers. Lunch hours will be 11:30 a.m. to 2:30 p.m.; reservations are accepted at 216-771-7130.

And more good news: In keeping with the wholesome, healthful vibe that Parker's has long been known for, the entire restaurant goes smoke-free on May 2.