Twenty years later, N.W.A remains best-known for fucking with the police. But why? 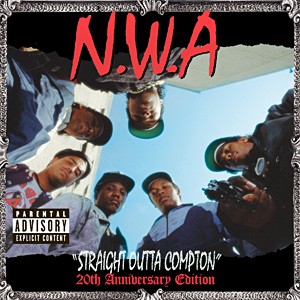 Rodney King was attacked again last month, shot in the face with birdshot as he rode his bike. If you didn't know better — that is, if you didn't realize that King has managed to keep his pseudo-celebrity alive for nearly two decades, through a series of run-ins with the law — you'd almost figure this latest incident was a stunt designed to publicize the reissue of one of the most incendiary hip-hop albums of all time.

King and N.W.A will forever be linked in the public imagination because of "Fuck Tha Police," the most infamous song on Straight Outta Compton, which was re-released last week in a 20th-anniversary edition. The track overshadowed the original album in 1988, it overshadows the new reissue, and it overshadows everything else about Compton.

It's a little strange now to remember that "Fuck Tha Police" was originally inspired by nothing more sinister than a series of drive-by shootings . . . with paintball guns. After being pulled over by the LAPD and subjected to a search at gunpoint, paintball aficionados and N.W.A members Dr. Dre and Eazy-E penned the track, putting the police on trial for racial profiling and serving notice that "a bloodbath of cops, dyin' in L.A." was a possible consequence.

But for all the controversy "Fuck Tha Police" spawned (the F.B.I. even got involved), the real-life, videotaped beatdown of King furnished the song its immortality. When an all-white jury acquitted four officers charged with beating King — thereby setting a match to Los Angeles' already-simmering racial tinderbox in April 1992 — "Fuck Tha Police" became the unofficial soundtrack. Never mind that N.W.A was, at that point, effectively finished, dissolved in the usual feuding over money and ego.

Listening to "Fuck Tha Police" today, you might be underwhelmed — and not just by the realization that the song exists somewhere in the middle of a long line of anti-authoritarian music that includes artists as diverse as Woody Guthrie, Bob Marley, and the Dead Kennedys. Dre's sinuous, soul-sampling West Coast beat — a dry run for the G-Funk that would rule the '90s — doesn't excite the way, say, one of Public Enemy's metallic manifestos from the same era still does.

In 2007, "Fuck Tha Police" sounds best when you stack the original version next to the remake — one of a handful of bonus tracks appended to the latest Compton reissue. (Almost all the cuts are Compton covers by N.W.A pals like Snoop and Mack 10, and all are dubious additions.) Bone Thugs-N-Harmony gives "Fuck Tha Police" a straightforward — and therefore nearly pointless — reading.

As N.W.A-inspired gangsta rap began to dominate the decade, the divide between the police and the hip-hop community continued to grow — thanks to the unsolved murders of Tupac Shakur and the Notorious B.I.G., the Rampart scandal involving an anti-gang unit of the LAPD, and the killing of Amadou Diallo by New York City cops, who fired 41 rounds at the unarmed man. And as these events were recycled into rhyme, the age-old message of "Fuck Tha Police" began to fuse itself to hip-hop's DNA. In recent years, witless rewrites of the tune — like Dead Prez's "Cop Shot" — barely stirred outrage. It's become a hip-hop platitude as tiresome as sideways caps and saggy drawers.

But Compton's farthest-reaching influence can be found elsewhere. The title track and "Gangsta Gangsta" — with their hometown-posse posturing, guilt-free depictions of black-on-black crime, and utter disdain of women — have left a much deeper mark on hip-hop and its culture than "Fuck Tha Police." Few, if any, police have been killed (one can assume) as a result of listening to Straight Outta Compton.

But there hasn't been a more influential line in music over the past quarter-century than "Life ain't nothin' but bitches and money," which Ice Cube spits out with a sneer in "Gangsta, Gangsta." Today, Cube is better known as the star of crappy kids' flicks than as a hip-hop pioneer, but he will never outrun the long shadow cast by that single quote and those who have lived and died by it.

Compton is also a very funny record at times. Eazy-E was no legend on the mic, but his nasal whine and comic timing brought humor to even the group's vilest boasts. Yet, if some of Compton's most over-the-top lines were a joke, it's one lots of listeners likely didn't get.

Without "Fuck Tha Police," Straight Outta Compton would remain a landmark fully deserving of yet another reissue. It was the moment when the hip-hop pendulum began to shift for the first time from East to West, and the album that introduced the last great rap group (has there been one since?) and paved the way for the unrepentantly materialistic and misogynistic hip-hop that has dominated ever since.

With "Fuck Tha Police," however, Straight Outta Compton became something else: a combustible proclamation by a bunch of unlikely activists. It remains a tad ironic that those who condemned N.W.A as would-be cop killers — or praised them as freedom fighters — ignored the casual nihilism littering the rest of the album. That nihilism is N.W.A's true legacy. But 20 years on, "Fuck Tha Police" is still providing cover.