Is Colorado undercutting the bribery market? 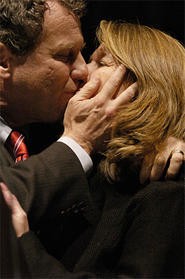 Back when Bob Taft ran this defiled land, you could win a charter-school license with a $3 bet in a craps game.

But new Governor Ted Strickland has decided that spending millions on schools that perform worse than Cleveland's may not constitute reform. So he's axed funding for start-ups, and is demanding that everyone else keep a checkbook.

It may be Ohio's greatest educational achievement in 50 years: Hey everybody, what if we decided to keep track of the money?

Compared to White Hat, Glenville High is Oxford. And despite producing lower test scores than you'd get at a Klan rally or a Cleveland City Council meeting, the company has gobbled up $109 million in state tax money -- though it refuses to say where any of it went.

Fortunately, owner David Brennan is hedging his bets by operating in multiple states. Even better, he's finding that bribery outside Ohio is more competitively priced.

Take the Denver Public Schools. In February, leaders voted unanimously to yank White Hat's charter, due to the small matter of sucking something fierce. So Brennan fixed the problem by Ohio rules: He bribed a guy.

Enter Bob Schaffer, former congressman, current member of the Colorado State Board of Education, and prospective U.S. Senate candidate. Schaffer's board essentially overruled Denver, forcing the city to keep White Hat. In return, Schaffer received $4,000 in campaign contributions from Brennan, most of which arrived just a month after the vote.

ProgressNowAction, a Denver advocacy group, accused Brennan of buying Schaffer's vote. "They're the worst of what's going on in the school-reform movement," spokesman Michael Huttner says of White Hat. "It's all purely driven by greed."

Here in Ohio, of course, we simply call that government. More alarming was how little Schaffer charged.

Brennan has given $40,000 to Ohio Auditor Mary Taylor, and thousands more to her predecessor, Betty Montgomery. If you don't want anyone looking at how you're spending state money, these are the people to pay.

And just to make sure he never runs afoul of the law, Brennan has given $130,000 to Ohio Supreme Court justices.

So while Punch appreciates Schaffer's importing of our traditions to the Rocky Mountains, we urge him to reconsider his fee schedule. If he doesn't hike up his prices, he runs the risk of making politicians look cheap.

Senator Stud
Not long ago, Sherrod Brown was stuck in a shitty job, hanging with a lesser class of people known as the U.S. House.

Then he married author, PD columnist, and Pulitzer Prize winner Connie Schultz. Suddenly, instead of having to admit he was a congressman, he could boast of a more respectable profession: arm candy.

But it appears Brown, now a senator, is still on the ascent. He was recently named one of Capitol Hill's "50 Most Beautiful People."

According to The Hill, a D.C. political rag, much of Brown's "stealthy sex appeal" comes from the way he treats his wife. He leaves her love notes (on recycled paper), takes her to the theater, and "serenades her with the Beatles." (We would have suggested Mötley Crüe, but why quibble?)

"I hope every husband in America is paying attention," says Schultz. "This is what makes a man sexy." Alas, it may also have something to do with the competition. House Speaker Nancy Pelosi, a 67-year-old grandma, finished fourth.

In related news, Dennis Kucinich finished 713 out of 535 members. Though judges praised his looks -- "like a baby hamster without the fur" -- they noted that the "congressman's 126-pound ego makes checking baggage a nightmare during weekend getaways to the Cape."

When Monday jumped from channel 3 to 19, a no-compete clause precluded him from investigating heinous misdeeds at libraries and tanning salons. So the station only showed the back of its mysterious new crusader's head. Though the graying man's initials were C.M., and his voice was strikingly Carl Monday-like, most viewers believed East Cleveland Mayor Eric Brewer had gotten hold of some silver spray paint and changed his name to "Chick Magnet."

Now Carl's no-compete has expired. His first investigation: Shady meat-handling practices by a West Side butcher! The story suggests Carl may take a more hard-hitting approach than at channel 3, when he was restricted to shady meat-handling at the Berea library.

"19 isn't afraid to take on anybody," says Carl. "The culture at channel 3 was that they tended to be a little more conservative."

Yet channel 3 is fighting back. After 19 stole Carl, 3 stole 19's Tom Meyer, the famed inquisitor who caught Cleveland Councilman Zack Reed driving drunk and making out with white chicks.

Meyer's no-compete won't expire till January, but don't expect any mysterious crusaders named "T.M." anytime soon. Meyer, it seems, won't stoop so low. "If channel 3 asked me to do that, I think we'd have to have serious discussions about it," he says.

After all, this is TV news, dammit. There are values to uphold.

Struggling strippers
First came the smoking ban. Then the bill that prohibits customers from touching the "entertainers." Then the city decided to shove its Flats strip joints to the West Bank.

If you're Angela Bates de Gongora, general manager of the Hustler Club, you've got plenty of problems. But you never expected to deal with the fallout of assholes shooting up the Warehouse District.

Since the shootout near Spy Bar on West Sixth, she says, business at her club has tanked. "Since the Fourth of July, our business has definitely been down. The seats have been less full, even on a Friday and Saturday night."