George Clinton readies the mothership for the next millennium. 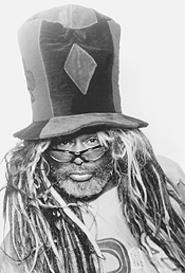 If the thought of Dr. Funkenstein chilling out with his fishing pole and tackle box strikes you as a bit odd, consider George Clinton's explanation for his recent vacation.

"I needed to take some time to get my groove together," he says. "Fishing is the only way you can collect yourself and start all over again. And we caught some nice fish. We caught so many, we had to put them back. I caught thirty-some fish. You have to start out fresh each time."

If that's what it takes to keep self-proclaimed "galaxy traffic cop" Clinton funking into the next millennium, so be it. After more than thirty years as leader of the Parliament/Funkadelic/P-Funk All Stars cartel (which has released more than two dozen albums in its various incarnations, including solo Clinton joints), the master funkateer proclaims he's not only ready for the 21st century -- he's been waiting his entire career for it.

"The plan was for us to be here in the last time zone with the new mothership," Clinton explains. "We're getting the virtual reality machine together on it, making sure we don't get caught up in that Y2K. We're going to be in the last time zone, and computers aren't necessary anyway. We have to deal with things the way they really are: funky. It's the way it's supposed to be, and it's always all right."

And with a new Parliament/Funkadelic album slated for release at the beginning of the year, Clinton is indeed saturated (and not just knee-deep) in Y2K ooze. It's the first album to bear the Parliament-Funkadelic moniker in decades ("People can discuss who they like the best," he laughs, "but it's the same people, just different names"), and Clinton plans to wind up the current 1999 Millennium tour in Fiji, the site of the first New Year. According to Clinton, a Rock and Roll Hall of Fame inductee, it's all part of a master plan.

"There's a concept called Planned Obsolescence," he says. "Everything gets old in a certain amount of time: a suit, a car, a marriage. It's hard to do anything about it. You have to reinvent yourself. So, you go along with the flow. And the more you try to stop it, the more you make it happen. So, just go along with it and let it take place, and then, when nobody's expecting it, bam!

"We've always had P-Funk All Stars featuring Parliament-Funkadelic, or even when it was "George Clinton,' it was always there: Parliament-Funkadelic. Right about now, Funkadelic is the essence of the whole thing: of Bootsy, of Parliament. The Funkadelic concept, which is a Parliafunkadelicment thing, is "Free your mind and your ass will follow.' We figured right about now is the time to come out and be one nation under a groove. Our plan always was to be here when the millennium changed, so the mothership can be ready for the new paradigm."

Earth to George. Are you still with us or just suffering from a healthy case of premillennium tension? Whatever the situation, Clinton is as bugged out as Busta Rhymes about this Y2K thing.

The 1999 Millennium tour commenced in earnest at Woodstock '99 a few months back. ("We had a ball there. It's always good for us to play in front of brand new audiences. A lot of people didn't know what the hell was going on," says the 1994 Lollapalooza veteran.) It's now gaining momentum as the century winds down, and although many of Parliament-Funkadelic's most famous alumni (Bootsy Collins, Eddie Hazel, Bernie Worrell) are now gone, a P-Funk jam still consists of nearly two dozen players, funking through thirty years in just under three hours. From Maggot Brain and One Nation Under a Groove to Computer Games and "Atomic Dog," the Clinton empire continues to evolve from a standard R&B group into the architects and original purveyors of funk. Its songs are among hip-hop's most pillaged, having been sampled as often as the James Brown catalog (as well as prime influences on the work of such disparate artists as the Red Hot Chili Peppers and that guy who used to be called Prince). And if it all seems a bit tame to modern ears, it was radical shit at the time and remains a hell of a lot more potent than any post-Dre g-funk.

Not showing any signs of slowing down, Clinton says he still wants to funk things up.

"It's easier to take chances now, because there aren't too many chances to take," he explains. "The shit they do with music now . . . Hip-hop just added to what rock and roll had already done. It widened our appreciation. Before rock and roll came, feedback was noise. Jimi Hendrix put that on record. And hip-hop was made from disjointed samples. It makes more things possible to enjoy and less things you have to worry about getting on your nerves. Anything parents don't like, I like."

As for his Y2K jitters, Clinton has long preached from the sci-fi handbook (he has even claimed to have seen extraterrestrials years ago). The entire P-Funk creed -- not to mention its live shows -- rests on its mothership. He just sees it as everyone else finally catching up to the reality of their surroundings. He, of course, has been there all along, waiting.

"Virtual reality is a serious alternative to consider," he proposes. "The Matrix just added to it. I was like "Goddamn! It's the new reality.' Magic and all that shit used to work back in the day. So when they said that the world was flat, people fell off the edge of it. When they said it was round, they could walk around the world and come back.

"I try not to think," Clinton continues. "I try just to feel it. What would be the most stupid thing to do? And since there are no laws governing, reality is obsolete right now. One of the things that's going to change with the new millennium coming in is logic and reasoning. You know how they say what goes up must come down? Well, that's not necessarily true anymore. What goes up doesn't have to come down. It can stay up there in orbit."

With, one presumes, the mothership and its cosmic commander up there to keep it company.