For compelling imagery from everyday digits, Jasper Johns is the master. 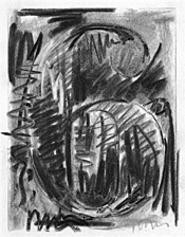 Jasper Johns entered the New York art scene at the tail end of the abstract expressionist movement, a period characterized by its lack of recognizable figures or narrative. A fan of flat, everyday objects in his work, Johns typically employed subjects like flags and targets, maps and numbers. Derided by Willem De Kooning for detracting from the beauty of abstraction, Johns was actually a harbinger of a new style of painting, which was influential in the development of both minimalism and pop art.

Inspired by Marcel Duchamp's "Readymades," Johns explored his interest in the conceptual nature of art by taking a familiar image -- like a number -- and creating a work using that image as the central theme. Through this process, he hoped to reawaken the eye, encouraging viewers to experience numbers in a completely different light. By 1960, he had developed four motifs within his numbers theme. The 39 pieces in the new exhibit at the Cleveland Museum of Art, Jasper Johns: Numbers, focus on all four motifs: Figures, Numbers, 0-9, and 0 Through 9. Viewed separately, together, or in series, the numbers in the works become lively and joyful. Juxtapositions in their installations allow the viewer to observe the nuances Johns loved -- as well as to look beyond the actual numbers, appreciating the surface and depth of the works as a whole. By selecting one theme that the artist explored throughout his career -- a theme in which the inherent meaning of the object becomes negated through his process of presenting it anew -- the viewer is left with the task of viewing rather than reading.

Johns's numbers morph into figural objects, which are then lost within the plane of the image that contains them. Surrounded by line and built-up depth, they forget to be numbers at all and begin to seem lifelike. Some vibrate with movement, while others remain static -- either as parts of a series within a single image or as a part of multiple images. This transformation is made literal when Johns assigns such words as "figure" to the titles of his works. In "Figure 5" from 1960, a large stencil image of the number five is constructed in encaustic and collage on canvas. The encaustic, a mixture of wax and pigment applied with heat to the canvas, builds stormy shades of black and white upon the surface. Glimpses of golden newspaper scraps affixed to the work serve as gilding to the otherwise dark image. "Figure 5" shares the same vigorous brush stroke as the adjacent piece, "0 Through 9" -- an equally large canvas, covered in intense, sporadic, predominantly primary colors that appear to have been applied straight from the tube. Presented side by side, the works create a dialogue of comparisons between subject matter and medium.

Similar dialogues can be found in other pairings throughout the exhibition, most notably in a side gallery that showcases Johns's minimalist tendencies. Two works, side-by-side and similar in size and content (they even share the same title), establish subtle nuances that emerge with prolonged viewing. Both "Numbers" -- one dated 1963, the other 1963-'78 -- evoke a steely industrialism in their rectangular gray forms. The 1963 image is made of sculp-metal on canvas, the other aluminum with oil paint. Both consist of a grid of numbers ranging from zero to nine, arranged in identical order. The sculp-metal, a popular commercial modeling material, yields a matte surface and edges that are somewhat blurred, particularly in comparison to its aluminum counterpart. The slight differences reinforce Johns's desire to create nuances that awaken the eye to new possibilities.

The exhibition was inspired by the museum's recently acquired 1960 piece, "Ten Numbers." Fashioned from charcoal and graphite on paper, each of the work's 10 numbers appears on its own sheet of paper. Exhibited in a single horizontal line, the dark renderings almost conceal the stenciled numbers they portray, which cultivates a moody, lifelike quality. The charcoal lends to the series a simplicity not found in works made from more complex media. A sense of intimacy results: The works feel as if they were just created, and the energy of the artist's hand still resonates from them.

By focusing on only one theme of Johns's work -- numbers -- the show would seem destined to spawn boredom and agitation among viewers who favor diversity in subject matter. That it doesn't is a testament to both the artist's vision and the show's presentation. Throughout his career, Johns managed to produce image after image of the same subject, and each was a distinct visual curiosity. The show's multiple ongoing "conversations" between works further heighten their meaning.

A second exhibition, on view in the adjacent galleries, makes a fine counterpoint to the highly focused works in the Johns show. Drawing Modern: Works From the Agnes Gund Collection greets viewers of the Johns collection with a non-numerical work by the artist from 1986. From there, Gund's collection of works on paper portrays a wonderful mixture of themes that are intended to be pleasant -- even meditative -- and showcases the talents of numerous well-known artists. It's a welcome contrast to all the number-crunching next door.