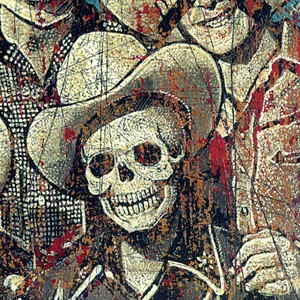 Jon Langford left town after his solo show at the Beachland Ballroom a couple weeks ago. But he left behind an exhibit of his artwork, titled Nashville Radio. Now on display at Arts Collinwood Gallery, the paintings pay tribute to old-school country music, which Langford — founder of British post-punk band the Mekons — occasionally plays as a member of the Waco Brothers. Since steering the Mekons into Americana territory a decade ago, Langford has become one of classic torch-country's most avid supporters. His paintings — which crib imagery from vintage publicity photos and sheet music — cut to the conflicted heart of the music, which dates from a time when sin always followed a bumpy path to redemption. Skeletons, cowboy hats, and acoustic guitars converge under a dusty palette of browns and reds. Yee-haw!
April 20-May 13