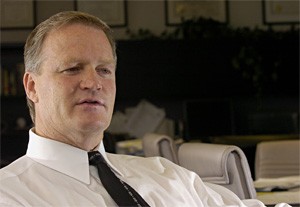 For the last month and a half, Punch has reported on the ever-more-suspicious business practices behind Scott Baltusnik's Mud & Grass Volley-Dodgeball Tournament, an annual event at the Cuyahoga County Airport in Richmond Heights. First, Wendy Nelson, director of Wags4Kids, a nonprofit that provides service dogs for disabled children, filed suit against Baltusnik, claiming she had been stiffed to the tune of $19,000 in charity proceeds from 2007's tourney. Then a Cleveland fireman came forward with a nearly identical story from the '05 and '06 event. Making things even stranger, Baltusnik announced on his website that he had found a charity for this year's event: Big Brothers Big Sisters of Northeast Ohio. But when reached by Punch, that nonprofit revealed that they hadn't even been contacted by Baltusnik.

If he can just screw over some cancer victims, Baltusnik might make a legitimate run for Don King's title of Northeast Ohio's Sleaziest Con Man.

But it's all catching up to him now. Paul Oyaski, the Director of Development for Cuyahoga County, has announced that his department will not be filing Baltusnik's permit application to use the airport for this year's tourney. "I read your article on the web and got a copy of the complaint," says Oyaski, "and decided to wait until this has been resolved in court.

"I don't think that county property should be used to take advantage of a charity," he continues. "[Nelson] was assured a much larger portion of the proceeds. What's fair is fair. As long as somebody says they're doing something for charity, they should do what they say. They don't promise $25,000 and deliver $6,000. That's not right."

While Baltusnik might be able to find another spot in time for the July 19 tourney, procuring a liquor license for a new location will be another matter entirely. And since holding that tourney without alcohol is a bit like a Sunday mass without self-loathing, it's safe to say this year's event will be postponed or canceled.

Meanwhile, the tournament's website remains a very interesting place to kill a morning. Baltusnik has replaced the Big Brothers Big Sisters announcement with one heralding Cleveland Junior Lumberjacks, a children's hockey league, as this year's charity. The contact number belongs to a father of a player in the league — an acquaintance of Baltusnik who vehemently denies that the Lumberjacks are involved in the tournament. "I know for a fact that there has not been a deal done," says John Hall. "And I'll have to have Scott pull that off the website. Because it's just a youth hockey league. The organizers don't want to be involved in all that bullshit."

As is customary, Baltusnik did not respond to repeated requests for comment, probably because he was too busy stealing old people's arthritis medicine.

County Prosecutor Bill Mason is hitting the campaign trail, hoping to continue his career in law enforcement and avoid his fallback career as Jimmy Dimora's Wet-Nap. But Mason's campaign strategy looks a lot like his record as prosecutor: quite colorful, but full of hot air.

In nine years as prosecutor in one of the nation's most nakedly corrupt cities, Mason has failed to investigate a single corruption case of worth, leaving the feds to clean up what he chose not to. In 2006, his office bragged up its nepotism investigation of Westlake Mayor Dennis Clough and Rocky River Mayor William Knoble, apparently forgetting the prosecutor's own history of hiring his niece and brother for plum jobs. And though he touts his tough stance on crime, he's long been known for chasing the easiest indictments. It keeps the numbers looking plump — and Mason is all about appearances. That's why, when he took office in 1999, his first changes were largely superficial: He ordered all male prosecutors to shave their beards, and designed a new official seal for the prosecutor's office.

So it was of little surprise last week when, at the Cleveland Orchestra's annual July concert on Public Square, Mason's campaign staffers walked around the square, greeting people not with literature, but with helium balloons — emblazoned with Mason's name, of course. And they gave them to kids not old enough to vote.

Asked if she even knew who Mason was, one girl shrugged her shoulders: "I just wanted a free balloon."

Back in 2001, after finding a bag filled with $640,000, which had dropped from a Cleveland armored car, Mark Morant did the unthinkable: He returned it ["The $640,000 Question," July 2003]. He got a $43,334 reward, which would have lasted Punch exactly one short day-trip to Detroit. But Morant says he's made it last — and used it to make all of his bizarre business dreams come true.

Morant's first plan, after quitting his security-guard job, was to become a hard-core rap producer in Cleveland. His Igloo Crew Records put out music by such artistes as the Scrilla Boys, the Mighty Igloo Crew, and the Smuggaluz. Shockingly, it didn't work out. "It was just so much competition in the music industry," laments Morant. "The Scrilla Boys got caught up in the streets and going to jail. I saw my money going down the tubes."

So Morant moved to his hometown of Miami, Florida, to escape the scrutiny of being the guy in the 'hood that found a bag of cash. "I couldn't move around, because everybody knew me too well after the money," he explains. "People were always asking me for money. And they were making me kind of fearful, because they'd be like, 'You still got that money in the house?'"

After the move, a second business plan came to Morant, who still had cash left from the reward: "I left Cleveland, and I was looking to invest my money in something different. When I came back home to Miami, it hit me that when I was up [in Cleveland], there was something that I was craving from time to time, and they never had it. The conch."

He's referring to conch fritters — Morant's newest business enterprise. Yes, you read correctly. As Morant explains: "The conch is an ocean snail that lives in a shell. And the conch fritter is that meat, fried up with spices and different herbs."

Morant's new company, To and Fro Distributors, sells a variety of seafood in Miami. But in Cleveland — a strange hub in his fledgling empire — Morant plans to sell only conch. He's already made a business trip here, marketing the snail to East Side restaurants like Hot Sauce Williams. And to Cleveland residents only, Morant is offering free shipping through his website, www.toandfrodistributors.com.

Sure, it's a strange business model. But they said Bill Gates was crazy too. We're just amazed that the guy's made $43,000 last for seven years. Can we make this dude mayor?