Flightplan soars for an hour, then ends with a tailspin. 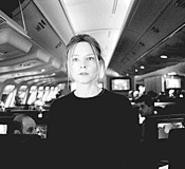 Flightplan, starring Jodie Foster as a mother who's lost either her daughter or her mind during a flight from Berlin to New York, is a wonderful movie for about an hour -- a moving, gripping rumination on loss, grief, and sanity. It works primarily because of its star, whose delicate, fragile face fills the wide screen like its own special effect.

Foster, inexplicably relegated to stylized action films in recent years, possesses the remarkable ability to shatter on command; her eyes well up, her brow furrows, and all of a sudden her calm visage roils like an idyllic shore battered by a storm surge. Indeed, when first we see Foster, as airplane engineer Kyle Pratt, sitting alone in an empty subway station, her eyes are moist and empty -- the blank stare of the bereaved, looking at everything and seeing nothing except what isn't there. A stranger appears from nowhere, and Kyle's eyes light up. It's her husband, come to fetch her, and she brightens like a summer morning.

Except Kyle's husband isn't really there at all: He's a figment of her broken imagination, a ghost whose body lies in a Berlin morgue, where she is headed to claim his remains before shipping them to a burial plot in New York. But director Robert Schwentke and editor Thom Noble keep us guessing for a little while: Is Kyle suffering a psychotic break, or is she merely trying to hold on to old memories before they disappear like footsteps in the blinding snowstorm in which she finds herself alone? It's a nifty trick that builds toward the bigger question asked in the movie's second act: Has Kyle really lost her child on a double-decker, U.S.S. Enterprise-sized luxury jetliner bound for Manhattan, or is her daughter, Julia (Marlene Lawston), also a manufactured memory, as the flight crew claims when it can't find Julia on the passenger manifest?

For two acts, the movie, written by first-timer Peter Dowling and Shattered Glass writer-director Billy Ray, obsesses over that inquiry, and Flightplan plays like a top-notch psychological thriller -- not the boo kind, but the boo-hoo kind, in which a character's inner torment becomes palpable, tangible, overwhelming. Everyone on the plane, from the pilot (Sean Bean) to the air marshal (Peter Sarsgaard) to the flight attendants (including Erika Christensen as the emotionless new girl and Kate Beahan as the insensitive vet) to the Middle Eastern men Kyle accuses of swiping Julia, swears they've never seen the girl. The flight attendants especially want nothing to do with Kyle: They loathe the passengers, all of them, but none more so than this irritant on the verge of becoming dangerous.

As Kyle begins to disintegrate, running up and down the airplane's aisles like a sprinter on a 10-yard track, the audience also begins to wonder whether Julia existed at all. We've seen her -- and her backpack and chenille teddy bear - and we've heard her too, begging her mother to hide her so no one will see how scared she is, but Julia's barely there. She's as shattered as her mommy, but misery has made her a doe-eyed zombie; no wonder no one recalls seeing Julia get on the plane; she makes no impression at all. She might as well be a ghost like her father.

But as the movie enters its final chapter, you will come to the sad, sickening realization that the filmmakers have played the audience for chumps. The first hour, which looks as beautiful as it plays, is nothing more than a shell game, and we're absolute suckers for falling for their ruse. What seemed so smart, so well crafted and finely tuned, falls apart into a flaming heap of crap, and all goodwill is dashed with this kick in the gut. To give away what happens would only serve the movie right; the spoiler arrives spoiled, after all, and you'd be well advised to steer clear. Suffice it to say that once the movie stops being about Kyle's frantic search for a girl who may or may not exist and focuses instead on another passenger, all the life and air and force is sucked from the movie. It becomes just another callow, dumb thriller -- the kind of movie that might as well star Wesley Snipes or Robert Davi or any direct-to-video hack, instead of someone as capable and compelling as Foster, now slumming it.

You will spend the final half-hour wondering just how a good movie can go so wrong so quickly; you will lament the state of the movie business, this moviemaking-by-committee that compromises vision, eradicates intelligence, and demeans the audience. Flightplan somehow manages to capture the feeling of flying: One second you're soaring, without care or caution, and the next you're hitting such horrific turbulence, you're knocked out of your seat and ready to throw up into a little paper bag.