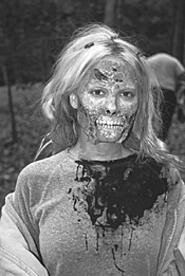 Once upon a time, there was a guy named Sam Raimi. He grew up in Michigan and made amateur horror movies. He stuck with his hobby, and now he's a filthy rich A-list producer-director in Hollywood. Beats workin'.

Unfortunately, since we haven't yet seen a genre-redefining horror movie in the 21st century -- apart from loops of 9-11 -- it's repackaging time again. Horror fans are expected to donate dollars to a pathetic charity like Jeepers Creepers or a muddled Raimi-wannabe project like 2002's Cabin Fever, and frankly, it's a bit sad. Sure, there's always coin to be made off people's fears, but the discerning viewer seeks gold, even in a seemingly tapped-out vein.

Here we have some frisky youngsters (à la Evil Dead), who venture to a remote location (à la Evil Dead) to die grotesquely (à la Evil Dead). For "variety," the youths are attacked not by demons, zombies, slashers, Fate, or menacing twigs, but by industrial-strength flesh-eating bacteria. Then they freak out and bleed all over everything, en route to a predictable revenge-of-the-nerd ending.

There's a modicum of lazy cheek here and there -- a freakish campfire tale and some forced "amusing" behavior -- but otherwise, it's Rehash City. Stephen King's short story "The Raft" makes a quick cameo, the Blair Witch lends her spooky trees, and thoroughly exhausted redneck caricatures are de rigueur. A line about canine-assisted masturbation is lifted from the short film "Puppy Love" by writer-director Josh Olson (of the similar but breezier gore-fest Infested). Later, we get a ghastly bastardization of Night of the Living Dead. Even the anthropomorphized bunny is recycled from Sexy Beast and Donnie Darko. A whole lotta secondhand stuff, and without Bruce Campbell out there in those woods, it's not really worth getting one's boots dirty.

If you do accidentally succumb to the advertising, you'll follow a small gaggle of hopeful actors toward the blood-soaked makeup trailer and, perchance, their doom. Rider Strong -- apparently not a punny porn pseudonym -- plays the standard-issue nebbish, pouting and barely tolerating James DeBello as the uppity shithead while lusting after Jordan Ladd as the shapely blonde nobody. They are joined on their sylvan misadventures by studly Joey Kern and saucy Cerina Vincent as the kinky sexpots, the latter of whom signed on for partial nudity and a prolonged gluteal scope-out. Before long, though, the holidaymakers' flesh begins to rot, and they argue in those requisite "I'm fuckin' serious, man!"-type scenes that are almost always lousy, with no exceptions here. Several stalking dolly shots and some eerie thuds by composer Nathan Barr (with modest assists from David Lynch's scorer Angelo Badalamenti) frame the formula.

Admittedly, people will probably like Cabin Fever, because it tries to be loose and outrageous. There's a dorky cop (Giuseppe Andrews) -- clearly modeled after Sam's brother, Ted Raimi -- who'll do anything for beer and babes. There's crotch-rot. There's even a swipe at racist white-trash that pays off so stupidly -- including the obligatory "surprise giggle" after the credits -- that it kills all pacing and makes one wonder what this movie is really about.

With regard to that, hypochondriacs and germ-freaks may dig it. Also, there are paranoid references to a religion built around some long-haired Jewish prophet who died nailed to a board. Gosh, it would be refreshing, just once, to have the backward yokels come running up and snarl: "They's practicin' sacrifice! That just ain't Shinto!"

If Cabin Fever were a little sleeper tossed off for fun, it would be easier to shrug and dump it on the cruddier creepshow racks, where it belongs. The problem is that it's really not fresh -- unless you've never seen a B-movie before -- and yet it's been trumpeted around the world at film festivals (apparently it was accepted into Toronto's before completion) and now rides a hard-sell campaign from Lions Gate, who are stupidly sidetracking May, their superior and much more original recent horror acquisition. This thing even arrives packaged with a huge rave from Peter Jackson, whose preeminence "splatoons" Bad Taste and Dead Alive blow it away, not just with gore, but with creativity and charm. Perhaps there's mutual industry back-scratching afoot to secure Jackson's Oscars for Return of the King. Stranger things happen in Hollywood.

All that's evident about this project is that its director Eli Roth desperately wants a piece of that Raimi pie -- much more than he wants to make a smart movie. Supposedly, he scribbled this thing while sitting up nights outside Howard Stern's bedroom as a PA on Private Parts, and it shows: Rather than doing anything truly shocking or surprising, his scenes merely hang up on you when you question their integrity. The only thing scary about Cabin Fever is that well-connected hacks get deals.