Mounting the offense against lazy rockers. 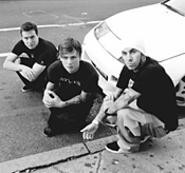 Suing Creed because they suck is kind of like suing a landfill for the stink. Nevertheless, four fans who attended a December gig by Creed in Chicago have filed suit against the band for what they claim was an unforgivably sloppy performance. In particular, frontman Scott Stapp appeared to be so "distressed" (read: drunk) that he rolled around on the stage, mangled lyrics, and apparently passed out at one point.

Unfortunately, we weren't at that gig, but we're eager to jump on the money train all the same. It got us thinking about grievous efforts turned in by the following artists, who will all be hearing from our lawyers:

"Everything has fallen to pieces," Blink-182 singer-guitarist Tom Delonge sang on "Anthem Part 2," the band's opening number at Blossom last summer. After this witless and sloppy show, we saw what he meant. Among Blink's offenses: The band misplayed its own songs, Delonge's voice constantly faded in and out of the mix, and the punk insouciance that was promised was replaced with by-the-numbers tomfoolery and rehashed jokes.

A year earlier, Blink took the stage at Blossom backed by a flaming sign that read "Fuck Blink." That's the kind of dumb, juvenile shtick that puts the fun in their pop-punk act: When they're on, they're a Farrelly brothers film set to music. But on this night they played like a bad Blink cover band, with a ragged sound fraught with blown chords and lyrics, and the same old jokes about farts and humping kin. Even 13-year-olds were rolling their eyes. Blink's most grievous infraction: a Travis Barker drum solo during which his kit was elevated and began spinning, with Barker suspended upside down à la Mötley Crüe's Tommy Lee. (And Tommy, you're welcome to join in this suit.)

When it comes to Korn, we're like C.C. Sabathia in the buffet line: We love everything. But even we know that the band's last stop in Cleveland sucked. Coming just two weeks after the group's Untouchables album stumbled out of the gate, Korn sulked around the stage like a bunch of tattooed toddlers. Increasingly frumpy frontman Jonathan Davis, clad in a bizarre leather dress that gave him the look of gothic kielbasa, was frequently winded (self-loathing apparently doesn't burn many calories). The rest of the band went through the motions, moving little, staring with disinterest at the rafters, then hunkering down over their instruments like heavy-metal hunchbacks.

In the past, Korn has compensated for the occasional off night with plenty of eye candy: In 2000, the band flew huge inflatable dolls over the crowd and was backed by monstrous video screens and a Dungeons & Dragons-style set. No such luck this time: Their stage get-up was dark and austere, with no accoutrements and sparse lighting. They gave less, but they sure weren't paid less: They raked in close to $40 a seat.

NOFX frontman Fat Mike admitted right off that his band had no plans to give 100 percent at the group's afternoon stop at Tower City last year. "I'm not usually up this early," he yawned, as NOFX lurched into a snooze-worthy set that made the audience just as sleepy. For a group that gets around to these parts only for the occasional Warped Tour, you'd think they could have gotten off their dead asses for 30 minutes.

You'd be wrong. Instead, NOFX wasted time between songs goofing on the other acts on the bill (always a classy move), loading its set with slow-paced material (wouldn't want to break a sweat for the thousands of dollars you raked in that day), and managing to make a half-hour set feel so much longer.