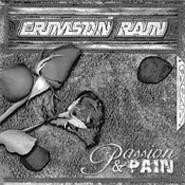 With songs like "All Your Love," "Precious Love," and "All I Want Is You," Akron's Crimson Rain packs the melodrama of an entire season of Days of Our Lives. And at its most maudlin, the band is just as overwrought as that daytime soap. "If I could stick you into my heart, I would bleed/I'd bleed your love," moans frontman James Hardy on the album's soppy opener.

But what ultimately saves the Akron foursome from self-parody is exceptional playing and top-notch production. Guitarist Charlie Trenta is capable of real fireworks, letting loose with inventive leads like a young Nuno Bettencourt. Likewise, Hardy's breathy, emotive coo on the album's many radio-ready lite-rockers is sure to weaken ladies' knees. Crimson Rain occasionally veers into pop metal (the album closer "All Your Love" sounds like a modern-day Mr. Big), but if Hardy gets a grip on the gushing and dispenses with that "our hearts were meant to fly" talk, Crimson Rain could be headed skyward.