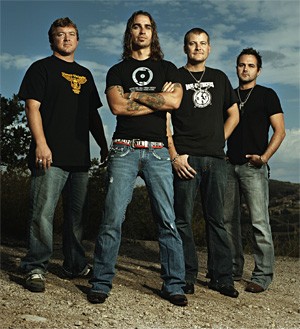 If this Oklahoma foursome isn't careful, it could become country music's Next Big Thing. These latter-day Creedence Clearwater Revival-style red-dirt rockers turn out tunes loaded with style and lyrical smarts. To hear a Ragweed song is to witness the execution of a musical tightrope act that most of its peers avoid. Lurking just beneath the surface of the radio-ready words, melodies, and harmonies is a kick-ass band ready to bust loose. The longtime juxtaposition of its underground-phenom status and major-label affiliation will eventually close the door on its cult-band standing. Frontman Cody Canada is largely responsible for the group's success. He mixes tight songs with an ample dose of attitude — which is well represented on the band's most recent album, Mission California. Cross Canadian Ragweed's dual nature carries over to one hell of a live show. So go see 'em while you still have a chance. It's quite possible that the next time they roll through town, they'll play a bigger venue.