Heaven and hate collide in A Murder of Crows. 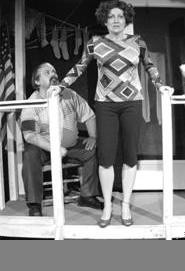 One of the tiny treasures of the English language is that, somewhere along our idiomatic pathway, we started giving groups of animals surprisingly appropriate identifying phrases. Thus, we have the familiar pride of lions, along with the lesser-known but equally delightful bloat of hippos and shrewdness of apes.

Playwright Mac Wellman chose one of these phrases -- A Murder of Crows -- as the title of his frequently comical one-hour rant on hypocrisy, bigotry, heroism, and the challenges of living downwind from a toxic landfill. This is the latest in a number of Wellman's works produced by Convergence-Continuum, and again the troupe has succeeded in harnessing the antic rage that infuses the playwright's imaginary world.

Middle-aged Nella and her post-adolescent children, Susannah and Andy, are living with Nella's wealthy brother, Howard (Wes Shofner), and his wife, Georgia (Lauri Hammer), now that Nella's husband, Raymond, has passed on. If that sounds fairly normal, you don't know jack about Mac. Susannah is a meteorological doomsday prophet, waiting and hoping for a Katrina-like weather disaster to flush her out of her miserable existence and into a honeyed land of happiness. Meanwhile, her brother Andy is home from the first Gulf War and has taken up residence on a pedestal in the yard, his skin burnishing to a golden hue as he becomes a statue to the glory of . . . himself.

Of course, Howard and Georgia are a matched pair of bigots with their own problems, nurturing their prejudices with care. Georgia, who has an unexplained rivet somewhere in her head, due to an incident that apparently is generating their riches, can't stand Howard's squatter relatives. ("I have a vision of how good America could be, if only it weren't for your family.") But Howard's no prize himself, explaining that "we old folks don't have much to do: Most of the people we hate are dead or locked up." On the plus side, his wife's seamless bigotry always gives him a hard-on.

If an hour seems like a short show, it's not when you're listening to Wellman's breathless, airtight diatribes, which are often directed actor-to-audience with no pretense of a fourth wall. In this unnamed town, where the only jobs these mouth-breathers qualify for are hauling sludge from the grease pit and cleaning airplane restrooms, fate stinks. And this dead-end existence comes spewing out in speeches that are ripe with the poetry of confusion and disgust, overlaid with absurd allusions and bracing obscenities. Even the throwaway lines have bite, as when Howard describes Georgia as "a venal old biddy with the mind of a circular saw."

Under the direction of Clyde Simon (who also plays the mysterious Raymond), the Convergence-Continuum players lend understated power to Wellman's dense and often overlapping dialogue. Leading the parade of misfits is Lucy Bredeson-Smith, who draws an indelible portrait of a woman crumpled by life. Her limping gait and bottomless expressions -- her face looks like a condemned house, vacant and gutted -- perfectly complement her terse delivery of darkly amusing lines. Speaking of Andy, she shrugs and says, "Mostly we leave him in the garden for photosynthesis."

As the Doppler-fixated Susannah, Denise Astorino delivers what is probably Wellman's theme for this piece, predicting that the world will soon undergo a cataclysmic transformation, with matter becoming spirit and people evolving into "something finer, harder, cleaner, more murderous, but much more spiritual." Her disgust with her current life is balanced when Andy (Geoffrey Hoffman) eventually steps off his pedestal and describes his stationary life as though it were heaven: "It's like the Epcot Center or Disney World. Heaven is like being inside the cockpit of an F-14 on the approach to a nice, fat target in Baghdad."

Wellman is at his best when he makes his similes collide like that, in unexpected ways. Those are the moments -- and there are plenty of them -- when Murder pries a small opening in the monolithic blandness of middle America and lets us peer inside. Less successful in this work, however, is his chorus of black-clad crows, who evidently are perched above the stage to offer avian commentary, but do little other than interrupt the flow. And the high-energy production winds down in a welter of self-indulgent, quasi-intellectual claptrap: "Maybe we're not using the right language, or maybe by using the wrong language we've only managed to redescribe ourselves . . ."

Even with his occasional excesses, Wellman is a writer who can wield telling details and a fiendish sense of humor. And we're fortunate to have a local theater that not only appreciates his talents, but can bring his scripts to vivid life.