Looking for fun? Crush will leave you blue. 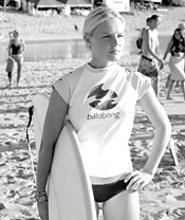 Let's all agree on one thing from the outset: The poster for Blue Crush is fantastic. It has a great color scheme; actresses Michelle Rodriguez (Resident Evil), Kate Bosworth (Remember the Titans), and Sanoe Lake (a professional model and surfer making her film debut) look as good as they've ever looked, grasping their long, hard boards; and yeah, they're wearing almost nothing. To look at the poster, it's as if the term Blue Crush applies not to life-threatening waves, but rather that feeling a heterosexual male gets in the nether regions upon hearing that the movie won't be rated R.

It was probably inevitable that the movie wouldn't or couldn't live up to the poster. But did it have to fall short by so massive a margin? Unless you count Lilo & Stitch, this is the first of several surfer-girl movies out of the gate, and it seems clear that in the rush to put it out there, a script was the last thing on Universal's mind.

But Lilo & Stitch should be counted, and here's why: In many ways, this is almost the same movie, minus the humor and charm. Once more the setting is Hawaii, and once more we have a girl in her late teens (Anne Marie, played by Bosworth) forced to take care of a little sister (Mika Boorem, a.k.a. the young Drew Barrymore in Riding in Cars With Boys and the young Charlize Theron in Mighty Joe Young) after the parents have gone away. In place of a tangible alien bugaboo, however, substitute a more nebulous phobia: Anne Marie wants to be the most successful female surfer ever, but can't surf the big waves because last time she tried, her head split open on a rock (as flashbacks relentlessly remind us). In spite of this fear, she's entered a big surfing contest, but washes out every time she tries to prepare.

Enter the obligatory love interest to distract her even further. When a football team comes to town, a group that consists of several hugely overweight black guys and one perfectly shaped Caucasian TV- star type (Matt Davis, Legally Blonde), it's obvious that romance is in the cards -- especially when said TV type offers Anne Marie huge sums of money for surf lessons. She's broke, you see, as are her roomies, Lena (Lake) and Eden (Rodriguez), because she got fired from her job at a hotel after confronting one of the huge black guys for leaving used condoms on the floor. (Lena and Eden resign as a solidarity move, though they inexplicably show up later in the same job, as if they'd never quit.)

Will Anne Marie get over her fears? Will love distract her? Does her new hunk really care about her at all, or does he see her as a mere summer fling? Will there be a Mountain Dew product placement? It hardly matters, of course, since the real point of the movie is the surfing -- which at least is mostly realistic, given that the actors were all trained and director John Stockwell (of the smarter, superior teen movie Crazy/Beautiful) and producer Brian Grazer (virtually every movie Universal's released lately) are themselves avid surfers. Yet they don't entirely trust their audience to bear with it, so some of the scenes are laden with the usual quick cuts, zooming cameras, drop frames, speed changes, and so on that have burdened action movies since Private Ryan (which was about the only movie to use them in nongratuitous fashion). The surf scenes that are just shot in a straightforward manner are exciting; too bad there aren't many of them.

A bigger problem is the focus on Bosworth, who's the least interesting of the three poster girls. We see some real, female pro surfers in cameos throughout Blue Crush, and they all look like ladies who could handle themselves in a bar fight. Bosworth feels insubstantial and looks generic -- she's twice compared to a Barbie doll by other characters, which isn't entirely fair, given her thankfully unamplified bust, but the fact remains that both Rodriguez and Lake have far more character and personality in their faces alone than Bosworth gives in her entire performance. One could argue that a white-bread lead is needed to get those Middle American dollars, but it's not an argument that'll wash, coming from a studio that made box-office stars of Vin Diesel and The Rock.

On the plus side, there's a neat hip-hop remix of Bananarama's "Cruel Summer" that neatly ties Blue Crush to teen movies of the past, as The Karate Kid featured the original version on its soundtrack. But another soundtrack choice points to a general cluelessness: P.O.D.'s cynical post-Columbine dirge "Youth of the Nation" is played in one key scene as a triumphant anthem, a misstep on the level of Ronald Reagan exalting "Born in the U.S.A." for promoting old-fashioned patriotism.