Cult of the Manimals

When horrorcore becomes a way of life. 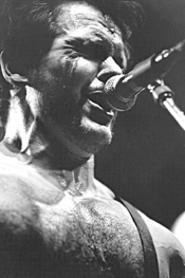 It's hard to deny being a bit peculiar when presenting oneself as half man, half animal, and so Larry the Wolf doesn't even try.

"I think I've always been a little bit eccentric," the stocky Manimals frontman chuckles from the living room of his Westlake home. "My father, who loves to misquote things -- he'd have a lot of Yogi Berra-isms -- he said to me once when I was a kid: 'You're like that thing in The Wolf Man, the way that you walk is thorny through no fault of your own.' In other words, you can't help it, but you're a little different."

For Larry, being different means donning sinister eye makeup and fronting a bracing horror-rock troupe that has grown into a cult favorite over the last 20 years. Though they've released only two albums since 1984, the Manimals have spawned a number of fan tribute sites, are a top draw at horror conventions across the country, and have seen their records fetch upward of $50 on eBay. Now, after a four-year wait between releases, the Manimals are back with a Halloween show at Peabody's, a new deal with Auburn Records, and a reissue of their classic Horrorcore LP.

"Their Horrorcore album that came out in 2000 on a very limited pressing was one of the best, most underrated albums ever to be released out of Cleveland in my opinion," writes Bill Peters, head of Auburn Records, in an e-mail. "I'm looking forward to finally giving the album its proper release on my Auburn label. A lot of people have been looking for this since it went out of print."

A lot of people have been looking for the Manimals as well. The band has maintained a low profile in recent years as it's weathered numerous difficulties -- namely, drummer Dark battling illness and old football injuries. Plus, guitarist Orlock lives in Michigan. But now they've regrouped and begun penning new material for a third album.

"Ordinarily you get cold, and people forget about you after a year if you're not doing anything," says Larry, an engaging but firm guy, who's built like a boxer and whose handshake can make your eyes water. "It's a strange thing for us: We seem to be able to continue to gain momentum with people even if we go away for a while."

That's not really so strange, considering that few bands merge horror and hard rock as forcefully as these guys, with breakneck rhythms and Larry's glass-gargling growl. The band's knowledge of vintage horror films -- especially the old Universal monster movies -- borders on the academic. Larry's idea for the band, in fact, sprang from a comic book he was trying to develop in the early '80s.

"I had a half-man, half-animal character that was based on H.G. Wells's Island of Dr. Moreau, I was talking to a comic book company in Chicago about selling the idea, and I thought this would be kind of cool to try and pull off onstage," Larry recalls. "It was right around the time that the bands that I really liked had changed. Kiss took off the makeup, Alice Cooper wasn't himself anymore."

And so Larry took it upon himself to bring a little mystery and danger to local rock circles. Over the years, he's developed a rep for having an increasingly short fuse for any kind of BS at Manimals gigs. He once leapt from the stage of the Phantasy Theater and chased a heckler out to the street to deliver a beatdown, before returning to the stage while the band was still playing.

"In more recent history, Larry left the stage while performing at a horror convention to hunt down and administer justice to an unruly patron who was bothering and making life miserable for several of the band's fans," Peters recalls. "In real life, he's a mild-mannered guy who is very sincere and passionate about his music. When he hits the stage -- look out! He transforms into a whole different person."

For his part, Larry is short on apologies.