The voices come from unusual places in Karamu's Bee-Luther-Hatchee. 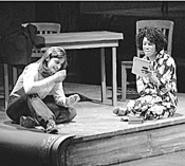 In a world where reality shows rule the TV roost and contestants are rewarded for lying and sabotaging their peers, the idea of discussing intellectual honesty may seem to some as quaintly passé as learning the intricacies of the minuet. But for others, such concepts still exert a fascination. And in his unfortunately titled work Bee-Luther-Hatchee, now at Karamu, playwright Thomas Gibbons enters the ring to wrestle with a number of heavyweight issues, including intellectual-property rights, the ownership of cultural identity, and a whole passel of racial conundrums. Gibbons constructs an ever-shifting hall of mirrors that keeps one's attention, even through some long stretches of overly analytical dialogue and excessively languorous pacing in the first act.

All these ethical storms swirl around Shelita Burns, a young African-American editor at a publishing house that specializes in works by black authors. She is picking up a nonfiction literary prize for the memoirs of a 72-year-old woman named Libby Price, who has written an enormously evocative book (also titled Bee-Luther-Hatchee) about her adventures as an itinerant black woman in the South. Strangely, though, Shelita has never laid eyes on Libby or even spoken with her on the phone -- the elderly writer is apparently very reclusive. Shelita has always felt compelled to reclaim lost literary voices from her culture; she has bonded with her phantom author and wants desperately to meet her, even futilely traveling to Charlotte to track her down. But this disappointment is assuaged, since Shelita's just received a lucrative offer to join another publisher, and her career is ready to blast off. As the new queen of the Manhattan book world basks in her glory, we catch glimpses of Libby sharing passages from her book, talking about her evanescent "smoke soul" that seems to appear, but is impossible to grasp.

(Spoiler alert: There's a dandy surprise at the end of Act One that will be revealed in the next paragraph, so if you're planning on seeing the show and want to preserve the gasp, stop reading now.)

However, on Shelita's final trip to search for the old gal, a middle-aged white man named Sean enters Shelita's hotel room and announces that, yes, he is actually Libby Price. That shocker leads directly into the intermission, during which all the actors remain onstage in their frozen positions -- an idea that is more interesting in theory than in practice, since one only feels sympathy for the performers, who are denied a potty break and a swig of Dr. Pepper. In any case, Act Two launches into a detailed deconstruction of who Sean is, how he came to pass himself off as an elderly black woman (in print, at least), and all the ways Shelita is monumentally pissed at him for clobbering her success, trashing her budding career, and stealing an arm's-length relationship with a woman she considered a role model.

Gibbons (a white man, by the way) poses many questions in this extended discussion, and the answers are as hard to pin down as Libby's smoke soul. Does a white person have a right to speak for a black person? Does the authorship of a book matter if the words touch people in a meaningful way? There are real jolts generated in these exchanges, primarily due to a fine performance by Monte Escalante as Shelita. Her incredulity, confusion, and rage at having to accept this hayseed scribe as her beloved Libby are fascinating to observe. While Derek Adams gives Sean a casual, laid-back attitude, he undercuts the potential of his role with some amateurish acting poses (he's a "hands-out" actor, speaking most of his lines with his hands extended, as if he's continually shaking an invisible toaster oven). As Libby, Margo McKnight is a dignified and largely ethereal presence, and Noha ElGanzouri is solid in her dual roles.

Director Terrence Spivey is sensitive to the nuances of Gibbons's script, almost to a fault, since there are enormously long pauses between cues in the first act that, if tightened, could enhance the production's impact and significantly reduce its running time (over two and a half hours, with intermission). But Spivey makes excellent use of a lovely set by Richard H. Morris Jr., which features large platforms in the shape of beautifully bound books casually stacked around the stage. Because the set employs different levels to define both time and place, as well as some deftly placed signage, the audience is never confused about which characters are where.

As if this play needed any more dimensions, Gibbons also adds a twist toward the end, when a relationship between Libby and a white southerner (Rod Freeman) turns out to be something quite unexpected. But by that time, most of the intellectual gamesmanship has been expended, and there's more than enough to think about. Oh, and as for the title: In African-American folklore, it means "the last stop after hell." This intriguing play deserves a better moniker.