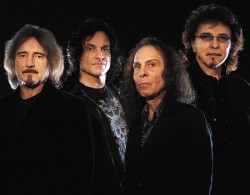 Black Sabbath: The Rules of Hell

This five-CD box includes all four albums Ronnie James Dio made with the legendary rockers: Heaven and Hell, Mob Rules, Live Evil and Dehumanizer. Ozzy may have rode the highway to hell with Sabbath, but it was Dio - with his devil-horn hand signs and larynx-shredding vocals - who built a house there. A perfect complement to 2004's Black Box, which gathers the Ozzy-era albums.

So what if none of her songs are memorable? It's Cyrus' enthusiasm that fuels this two-disc set (which includes a couple of tunes not seen in the movie's theatrical run). Four pairs of 3-D glasses put you and your pals in the center of the action. Best: The Jonas Brothers take over the stage, while Cyrus goes through a wardrobe change, and proceed to rock the little girls' worlds.

It Still Moves: Lost Songs, Lost Highways, and the Search for the Next

Amanda Petrusich's exploration of alt-country music is part travelogue, part Americana history lesson. The usual suspects show up - Gram Parsons, Uncle Tupelo, Wilco - but it's Petrusich's incisive commentary and revelatory road trip that drive her story. In the end, It Still Moves manages to connect the dots between rural routes, great songwriting and the big country paved along the way.

More than just a button-mashing fighter, this Xbox 360 game combines RPG-style narrative with some kick-ass combat moves. A "cybernetically enhanced super warrior" takes on renegade machines that are plotting to take over the world with ginormous monsters and various limb-tearing creatures. The huge arsenal of super-cool weapons packs enough firepower to level a small city. Imagine what they can do to your foes.