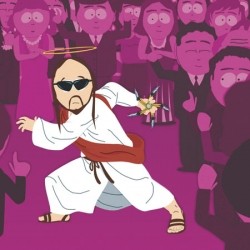 South Park: The Complete Eleventh Season — Uncensored
(Comedy Central/Paramount)
This three-DVD set includes all 14 episodes of the cartoon cutups’ 11th season, along with mini-commentaries by creators Trey Parker and Matt Stone. “Le Petit Tourette” (where Cartman fakes an ailment so he can swear as much as he wants) and “The Imaginationland Trilogy” (a three-part story nominated for an Emmy) are classics, but best is “Guitar Queer-O,” where Stan and Kyle become addicted to a certain plastic-axed game.

House: Season Four
(Universal)
Our favorite TV-doctor show — about a pill-popping crank with the worst bedside manners ever — rebuilt itself last season with new cast members and more complex storylines. This four-disc set compiles 16 episodes, plus some cool behind-the-scenes features — including a breakdown of one ep’s awesome bus crash.

Soulcalibur IV
(Namco Bandai)
Beating down opponents has never looked more splendid, as this old-school fighting game goes next-gen in a big way. In addition to top-notch online and create-a-character modes, Star Wars faves Yoda (in the Xbox 360 version) and Darth Vader (PlayStation 3) show up to kick some major ass with their lightsabers. Cool, it is!

Space Chimps
(Brash Entertainment)
Way more fun than the animated movie it’s based on, this adventure game (for the Xbox 360, Wii, PlayStation 2 and Nintendo DS) works best when players swap which monkey they want to use, depending on the task at hand. Two of the film’s simian stars work their way through puzzles, battles and the usual jumping/climbing/running button-mashing while taking on an otherworldly tyrant. Bananas!

Z Rock
(IFC)
Real-life crap-rockers ZO2 play a sorta-fictional version of themselves in this new comedy series (premiering at 11:30 p.m. on Sunday) about a struggling band that makes ends meet by playing kids’ parties. The jokes are mostly tossed-off and subtle (think Spinal Tap). The cameos — from Sebastian Bach, Dave Navarro and the fat guy from Blues Traveler — keep it real.
mgallucci@clevescene.com