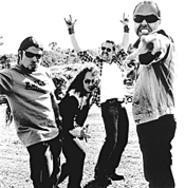 Metallica used to get into fistfights onstage, turn dressing rooms into latrines, and rip through so many cans of beer that Alcoa stock would rise with each tour. So it's little wonder that, two years ago, the band members paid $40,000 a month to a sports therapist to help them deal with each other. As the hit documentary Some Kind of Monster reveals, the shrink in question, Phil Towle, succeeded in getting them to yell at each other a lot, then promptly tried to exacerbate their troubles when they told him he was no longer needed.

Watching the film, we were taken aback by how unqualified the guy was to help these guys. Did Towle scribble the Metallica logo on all his notebooks in junior high? No. Did he ever play air guitar to "Blackened"? No. Did he ever vomit in the parking lot of a Metallica gig after downing too many brews? Not likely.

But we did. And these formative experiences make us much more capable than this stiff of helping Metallica overcome its woes. We've read Ann Landers for, like, a week now, and we're on our sixth High Life, so it's time to let the healing begin. Here's what you do, guys:

Pen More Songs About Hypothermia
Growling out self-help mantras on last year's St. Anger, James Hetfield sounded like Dr. Phil trying to pass a kidney stone. "My lifestyle determines my death style," "I want my anger to be healthy," "I wanna cry" -- yeah, and so do we, when we hear crap like this. We liked the mighty Met much better when James sang about headbanging till it hurt, dudes on horses, and getting trapped under ice. Metallica getting in touch with its feelings? Better to get in touch with a dozen or so beers.

Let the Best Player Play
Though he's one of metal's all-time greatest guitarists, Kirk Hammett was as absent from St. Anger as the record-buying public. The result was a turgid, oppressive album that sorely missed his fluid, expressive solos -- especially on the many all-you-can-eat riff buffets. As the movie reveals, Hammett is a real-life mediator between Hetfield and Lars Ulrich. On record, he plays much the same role, allowing the band's music to breathe by lightening up the low end.

Let Bob Rock Roll Elsewhere
After a decade and a half of his sanding down all of Metallica's rough edges, it's time for producer Bob Rock to move on. His surname says it all: Our grandma's fake hip is more metal than this guy. But what do you expect from a dude whose other producing credits include Loverboy, Veruca Salt, and the latest from pop-punk wussies Simple Plan? From the abysmal Re-Load to the unbearable S&M, Rock has been behind Metallica's most embarrassing moments -- and that's saying something for a band that wanted to call its first album Metal up Your Ass.

Listen to the New Guy
Bassist Jason Newsted was the only member of Metallica who knew that Machine Head was more than just a record by Deep Purple. And so it was odd that the band decided to get heavy again after Newsted departed: He undoubtedly would have made St. Anger less stilted and forced. Newsted split because he wasn't allowed to contribute his ideas. Having cut his teeth in Suicidal Tendencies, new bassist Robert Trujillo has a connection with the hardcore/metal underground similar to Newsted's. And since he's got arms almost as big as Lars's ego, we're betting that the rest of the band listens to the guy.

Don't Listen to People Like Us
They made a record like St. Anger because so many of their longtime fans were questioning their manhood after all those watered-down albums of the '90s -- and these guys obviously take a lot of pride in their tallywackers. But as those fans quickly found out, Metallica trying to be something they're not is just as bad as Metallica becoming radio-friendly hard-rockers. After selling 80 million records, the band has earned the right to do things its own way; that's what made it great to begin with. These guys need to call their own shots -- or call it a day.