Cancer is more deadly if you're poor. 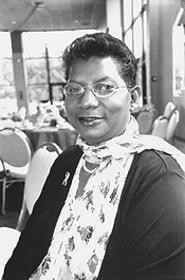 Batima Tene Cochran was a 25-year-old actress attending graduate school at New York University when she discovered a lump in her breast. Sadly, her worst suspicions were soon confirmed: She had cancer.

Cochran's mother, Barbara Smith of Cleveland, recalls that her daughter had one negative experience after another with the physicians she visited in New York. The doctor who diagnosed her didn't take time to explain her illness or treatment options. The one who eventually operated on her performed a lumpectomy instead of a mastectomy, which subsequent doctors told her should have been done.

After attending a breast cancer seminar at the Cleveland Clinic, Smith had her daughter return home to continue treatment. Doctors here recommended an immediate stem cell transplant. But Cochran couldn't pay for it, and her school insurance didn't cover it. So the hospital recommended that she get on Medicaid. As Smith waded through the red tape, Cochran's condition deteriorated.

That's when an advocacy group called Minority Women With Breast Cancer United got involved, using its contacts to push Cochran's application through the system. After about a month of waiting, she received the transplant. Cochran improved so fast that a few weeks later, she was back in school.

Experiences like Cochran's have added a new dimension to National Breast Cancer Awareness Month, a time when public health advocates sound the usual warnings to help women protect themselves against a killer: Schedule a yearly mammogram. Check your own breasts once a month. Watch your diet. Exercise.

This year a different kind of awareness campaign is emerging, prompted by survivors of breast cancer themselves. Along with scores of local groups, the National Breast Cancer Coalition is focusing on the inequality of treatment options for the poor and underinsured.

"I want to see the same treatment and care of our people as [for] affluent women," says Geri Blair, co-founder and executive director of Minority Women With Breast Cancer United. "We know women with money are getting better treatment than we are. But it shouldn't be that way."

Breast cancer is the second most common form of cancer afflicting women, topped only by skin cancer. According to the Susan G. Komen Breast Cancer Foundation, the most significant risk factors for women are unavoidable -- being female and getting older. An estimated 175,000 new cases will be diagnosed this year, and 43,300 women will die of the disease. Statistics also show that, of all ethnic groups, breast cancer has been most deadly to African American women.

Blair, a breast cancer survivor who was diagnosed with the disease fourteen years ago at the age of 41, suggests several reasons for this. African American women are frequently diagnosed later than white women, after their cancer has progressed to more advanced, less curable stages. She says African American women of all ages and incomes also face a cultural taboo against touching themselves, which may inhibit them from conducting breast self-checks. Moreover, low-income women tend to skip recommended yearly mammograms and, once diagnosed, leave their treatment regimen up to doctors and insurance companies rather than being firm, well-researched advocates for their health.

Blair is working on two fronts to better the survival odds for minority women: educating for early detection and advocating for equal access to treatment. She actively supports the Breast and Cervical Cancer Treatment Act, national legislation that would ensure treatment for women who are diagnosed with breast or cervical cancer, but lack the means or insurance needed to pay for the recommended course of care.

Right now, funding is available to screen such women for cancer, but not to treat them. Congress appropriated funding for breast cancer and cervical cancer screening nearly a decade ago, targeting high-risk, low-income, and underinsured women. Unfortunately, according to the U.S. Centers for Disease Control and Prevention, the screening program reaches only 12 to 15 percent of the eligible population.

And the local program seems to mirror its national counterpart.

"There are probably thousands of women in the area who would have been eligible last year," says Donna Burke, a registered nurse who directs the program for the Cuyahoga County Board of Health. "And we screened 1,700."

Blair says the program is not being marketed well, especially to African American women. Burke disagrees. Despite a limited marketing budget, staffers speak at churches, health fairs, and other events to publicize the program. Since 1994, it has been responsible for detecting breast cancer in 51 women and cervical cancer in nine. To qualify for a pap test, women must be forty years or older. They must be fifty years or older to qualify for a mammogram. They also must be uninsured or underinsured.

Burke says she isn't aware of any women being denied treatment. However, many of them are billed for it, despite a demonstrated lack of ability to pay. Burke recalls one woman in the program, a minimum-wage worker with no health benefits and children to support, who was diagnosed and treated for cancer in one of her breasts. Her bills from the radiation and chemotherapy totaled $60,000. Now she has cancer in her other breast.

And even the best intervention efforts aren't always successful. In the case of Batima Tene Cochran, she was no sooner back at school auditioning for a play when more cancerous lumps were discovered, this time under her arms.

Cochran died three years ago in April, and her mother is still overwhelmed by the memory of her struggle. Thanks to Blair's group, Smith believes her daughter benefited from every option available to her. But she doesn't like to think about what may have happened if Cochran had had better insurance at the beginning.

"You hate to think you might get better care if you have top-notch insurance," she says.

She hates to think it, because her daughter likely would have received better care. That's why activists like Blair won't stop thinking and talking about it. Not until all breast cancer victims are able to receive the best treatment available, regardless of their ability to pay.

Jacqueline Marino can be reached at jmarino@clevescene.com.