Dave Thomas expands his sound on a newly recorded LP. 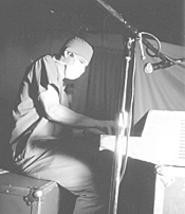 Cleveland's Dave Thomas, frontman for the legendary pre-punk band Rocket From the Tombs and founder of art-rockers Pere Ubu, has a new album in the can. Slated for October release, 18 Monkeys on a Dead Man's Chest will feature Thomas cohorts Two Pale Boys (former James trumpet pioneer Andy Diagram and They Came From the Stars I Saw Them guitarist/noise specialist Keith Moline). The disc will be Thomas's third LP with the duo since 1996 and his 29th overall, counting Pere Ubu releases, one-offs, theater projects, and this year's long-overdue debut from Rocket.

Thomas's label, Nevada-based Smog Veil Records, describes the disc as "dark and harrowing," a continuation of the moody arrangements of his 2001 LP with the Pale Boys, and compares it to Document-era R.E.M., Nick Cave, and Hank Williams, drifting from three-chord punk to soundscapes featuring strings and brass.

"The album carries on the work of Surf's Up!, but takes it into darker territory," says Thomas. "The intent is harsher. It's more of a James Cain story than a Raymond Chandler."

Thomas will also keep busy with Rocket, which re-formed last summer for a series of shows. He says the well-received national trek was "Miserable. Can't wait to do it again."

· Details are slowly emerging regarding the 2004 Cleveland Music Festival. It will take place May 20-23 at venues including Scene Pavilion, Peabody's, Pirate's Cove, the Phantasy, and the Agora.

Ads promise Scene Pavilion sets by the M25-lineup of the Misfits, Mushroomhead side project (216), alt-rockers Local H, local crushers Disengage, and others; dates for those shows have yet to be announced. Undisclosed "hundreds of bands from all over the country" are scheduled for the rest of the festival. There will also be a panel, at an as-yet-undisclosed location, featuring recording-industry executives. As of press time, no further details were available at www.clevelandmusicfestival.com, and a representative did not return repeated requests for information.

· Hip-hop sensation Twista will make an in-store appearance Saturday, May 15, at Akron's 2 Live Music Superstore (1286 Wooster Avenue). That evening, the twisted one will perform at the Agora Theatre with 8 Ball, MJG, Carl Thomas, and Slum Village.

· The Rock and Roll Hall of Fame and Museum has announced the lineup for Summer in the City, its annual series of outdoor shows by local and national acts. The series will launch June 9, with sets by Cobra Verde, the Sign-Offs, and the A10's. The shows will take place every other week through August 18. Other featured bands include Disengage, Red Giant, the New Lou Reeds, Lovedrug, and Victory Records' Spitalfield. For a full schedule, visit www.rockhall.org.

· WBWC-FM 88.3 has announced the lineup for its 2004 Summer Marathon series. Beginning May 13, the Baldwin-Wallace station will feature one artist for 18 continuous hours every Thursday. The marathon lineup starts with the Police and includes David Bowie, the Who, artists from the Vans Warped Tour, the Smiths, and Rush (presumably one long, kick-ass drum solo). Visit www.wbwc.com for a complete schedule.