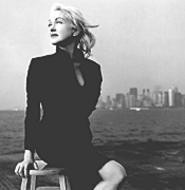 Cyndi Lauper, a name synonymous with the '80s, has never really left the fringes of pop culture, despite seeing her public profile dip a bit over the last two decades. She was the first female artist to score four number one singles, and she has since toured with Cher and Tina Turner, written the theme song for The Goonies, scored the soundtrack to Private Properties, acted in movies such as Vibes, The Opportunists, and Off and Running, and won an Emmy for her work on the sitcom Mad About You.

And now Lauper has come full circle with her latest CD, At Last. It features interpretations of such classic songs from the '50s and '60s as Dionne Warwick's "Walk on By," the Animals' "Don't Let Me Be Misunderstood," and Etta James's "At Last."

"When I hear those songs, I remember how I grew up and the neighborhood and how the music affected people around me and what those times were like," Lauper says. "It's all about the soul in the music."