Til Death Do Us Part (Columbia) 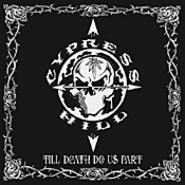 Not many hip-hop acts have been in continuous operation since the genre's early '90s golden age. Latin rap pioneers Cypress Hill are among the few, and their seventh studio set occasionally reveals the strain. "Til Death Comes" features the couplet "I brought you thug shit/Taught you drug shit . . . Tell me what we haven't done," the sort of boastful career summary normally delivered with told-ya-so spite. Instead, with mournful piano and harp glisses behind them, the words seem funereal, posing an unasked question: After almost 15 years, what's left?

The best answer is the beat-making skill of Muggs, who's too savvy to let the Hill go gently into that good night. After fusing metal and hip-hop in the late '90s, and detouring into straight-ahead stoner rock on his 2003 solo debut, Muggs has returned his L.A. bandmates B-Real and Sen Dog to relatively solid ground -- the slightly woozy beats that powered many a Cypress classic. The lone new wrinkle is reggae, which, for all the group's hempcentric tendencies, is less effective than you'd think. "What's Your Number," a collaboration with Rancid's Tim Armstrong atop the Clash's "The Guns of Brixton," and the dancehall duet with Damian Marley, "Ganja Bus," have the waxy sound of good ideas executed years too late.