The master of macho dialogue may have lost his touch. 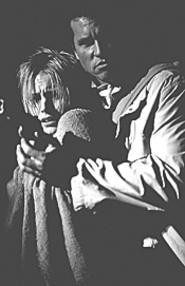 The problem with Spartan isn't so much that it's mediocre, but that it could be a whole lot better. Unlike writer-director David Mamet's last movie, Heist, a film with such a generic plot and predictable Gene Hackman performance that it never had a chance, Spartan has a reasonably compelling story that makes the viewer at least wonder (though not always care) what will happen next.

The problem lies with virtually every element other than the story. Though the film's title refers to a story about the ancient Greek king Leonidas of Sparta -- who would send a single soldier to anyone who requested military aid -- the title could also refer to the cinematography, locations, and characterization at play. Director of photography Juan Ruiz-Anchia previously worked on the Edward Burns con-game flick Confidence, and he shoots this film almost exactly the same way -- full of grainy footage with superfluous reds and blues.

As for the cast, well . . . blessedly, Mamet regulars Ricky Jay and Rebecca Pidgeon are nowhere in sight, and David Paymer merely makes a cameo appearance as a TV news anchor. Ed O'Neill is reasonably frightening as a tough government official, and Derek Luke is impressive as a greenhorn military operative. But William H. Macy is simply not menacing enough to come across as a threat, and Val Kilmer, in the lead role, is a sad disappointment. Playing the lone Spartan warrior, a super-secret military operative allowed to kill with impunity and disappear into the shadows, Kilmer would seem to be a decent choice -- the Zen-like spaciness he often brings to the screen ought to translate into the kind of blankness such a character needs. Unfortunately, he seems to have made the choice to play it dumb, with hints that he's kind of a redneck in his civilian life, peppering his speech with phrases like "you don't gotta" and "ain't," which don't ring true. John Travolta, who's been doing this kind of role a lot recently in movies like Basic, would have been better.

It's best not to reveal too much of the story, as any enjoyment you're likely to get from the film depends utterly on its ability to surprise, but it involves the President's daughter going missing and Kilmer's Robert Scott on the case. Paranoia from both sides of the political aisle is in play, as this President is not just a naive dupe in the thrall of malevolent handlers obsessed with waging war, but also a philandering womanizer who uses law enforcement to cover up his indiscretions. Mamet clearly didn't have a large budget to work with, which isn't itself a bad thing, but becomes glaringly problematic when, for example, an elaborate heist is painstakingly plotted, we expect to see it, and it's almost immediately ditched in favor of "run at the bad guys and shoot them." The climax also depends on the sudden appearance of a new character not previously established -- one wonders whether budgetary issues prevented the shooting of an adequate set-up there.

But what of the dialogue, you might ask? Mamet's a dialogue guy, with all the rapid-fire macho B.S. talk he's so famous for, isn't he? Um . . . he was. But he isn't very good with it here -- the best line is a blatant crib from Roddy Piper in They Live, you know, the one about being all out of bubble gum. When Mamet tries his hand at military code-speak, it just sounds silly. "Lemme speak to the Chinaman," says Kilmer, over the phone. "You tell him the only man ever heard him call on Jesus." And Mamet's getting lazy with character definition -- Kilmer's Scott is clearly supposed to be tough by virtue of the fact that he eats his apples with a knife. (Note to would-be tough guys -- using any kind of cutlery to eat an apple just makes you look stupid.)