Robert Altman's love letter to ballet is beautiful but empty. 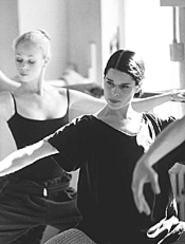 Feel like an evening at the ballet? Robert Altman's The Company, a lovely and superficial performance montage, is less a movie than a series of impressions, a rich sampler of a season with one of America's premier dance companies -- the Joffrey Ballet of Chicago. There's scandalously little by way of plot, though there is a modicum of conflict, largely among people we never get to know. Will you care? That depends: How do you feel about ballet?

That is to say -- if you don't like dance, there's not much here for you. If, on the other hand, you fondly remember the day you first packed your toes into a pair of pointe shoes, you may enjoy the nearly two hours of spectacle that is The Company.

Altman is clearly entranced with the gorgeous elegance of ballet; he worships at the altar of the slender neck, the pointed satin toe, and the bulging clavicle. Meanwhile, we get almost nothing else. If there is a plot, its protagonist is Ry (Neve Campbell), a soloist with a pushy mother; its villain is Alberto Antonelli (Malcolm McDowell), the company's artistic director, whose relentless fondness for yellow likens him to a banana. But this man is no banana. He's more like a queeny pepper. He's snide; he rants; he's exactly the artistic director you've come to expect from dance movies, insulting and praising his dancers in the same breath. "You look like you've got a load in your pants!" he bellows, and then, "But I love you all a lot. You're all great."

Neither Ry nor Antonelli has much of an arc, as they say: Ry loses one love and gains another, and Antonelli goes about his sniveling business at the end of the film exactly as he did at the start. It's as though Altman has borrowed the prescription that Jerry Seinfeld once made for his show: Nobody hugs, and nobody learns anything.

Meanwhile, audiences will want to know how Campbell does in this rarefied element. Her dancing is lovely; kudos to her for the tremendous labor it must have been to return to pointe after 10 years of using the entire length of her foot. Her character, on the other hand, is a blank -- a Louise Brooksy husk with no apparent feelings or proclivities, save for candles. (What's a single girl in a studio apartment doing with 18 eggs? She must be on Atkins.) This seems more the fault of the writing than of Campbell's acting; she lacks a single interesting thing to say. Therefore, she's fun to watch only when she isn't talking, as when she's dancing or playing pool or seducing the sexy chef (James Franco) who has stopped into a bar to watch her shake her thing. The chef becomes her boyfriend, and he too lacks a personality -- but boy, can that man slice a tomato.

If Altman wanted to film a love letter to dance, why not a documentary? And why hire an actress to play the lead, when you could have had a dancer? Yes, Altman does drama, and he likes ensembles; he wants to get inside a community and show us how it works. So where's the drama? And where's the community? There are hints -- an aging prima ballerina demands her way, dancers attempt to negotiate with Antonelli, the company makes fun of itself at the holiday roast -- but no character other than Antonelli is developed enough to register. Worse, the minor characters, most of whom are played by Joffrey dancers, are simply not actors.

This is dance at the expense of depth, and by the end, it's hard to care at all about anybody. In fact, Altman seems to be almost purposefully avoiding drama. At the holiday roast, when Ry's triumphant pas de deux is sent up by her ex-boyfriend, Ry simply leaves the room. She doesn't storm out of the room or slink out; she doesn't snarl or whimper or pout. She just leaves, blank as ever. Hello? Character?

Meanwhile, back at the sexy-chef boyfriend plot, all is silence and innuendo. They smile, they cuddle; they work hard at their separate demanding jobs. They are the young and beautiful cultural elite. But there's no evidence of anything between these two paper dolls except physical attraction; we're expected to get the groove on their relationship via the incessant, moody repetition of "My Funny Valentine." Was it really necessary to play three different versions of this song? (My money, for what it's worth, is on Elvis Costello.) Altman wants to portray the coupling as a dance, and the metaphor is durable enough to sustain his conceit, but, well, maybe Antonelli says it best: "You're all so pretty. And you know I hate pretty."

By the end of the film, we've seen selections from 10 ballets, most of them lovely, several of them breathtaking. Unfortunately, the film ends on an elaborate, fauvist extravaganza that involves gigantic animated set pieces and, with one exception, hideous costumes. If the company is a character inside a plot, this is its climax; we've certainly witnessed our share of the brutal preparations. ("Trinity, this is where you come in and get eaten.") As it is, nothing much comes to fruition. That's why it's all the more a shame that the finale is a pretentious mess. Can we really be expected to get behind a woman in a purple unitard, with a purple hood stretched skyward by a large, purple helium balloon? Perhaps we could, if she weren't taking herself so seriously.

Clearly, Altman isn't aiming for transcendence; a dancer's injury in the final scenes is clunky and real and -- true to the movie -- no big deal. But he wanted something from these final moments that he didn't get. Surely, it wasn't comedy?