Hip-hop, clowns, and war dances meet on the street in Rize. 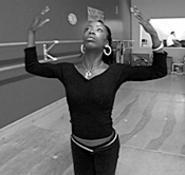 Forget Mad Hot Ballroom. The real dance documentary hit of the summer is more likely to be Rize. After all, which do you think the kids are going to find more appealing: formal steps that require suits, partners, and schoolteachers; or shaking the booty and slamming into fellow dancers while sporting war paint or clown makeup?

In Rize, director and fashion photographer David LaChapelle, expanding on his award-winning short film "Krumped," introduces us to the new dance forms popular in South Central Los Angeles through the charismatic "ghetto celebrity" known as Tommy the Clown. A former drug dealer who now hosts children's birthday parties, Tommy is credited here with creating the dance style known as "clowning," which combines the physical comedy of a clown with hip-hop moves, many of which begin with a base form called "the stripper dance." It isn't what you may think -- no poles are involved. Rather, one makes a wide leg stance, as if riding a horse, shakes the butt, makes the arms convulse, and adds on stuff from there. It's a bit disturbing to see some of the really small girls doing it; parents assure the audience that it isn't sexual, but when they do a split and pull up their shirt, it seems at the very least inspired by other people for whom the gesture is sexual.

Many of those who enjoy the clowning style form their own clown troupes, and it's gone beyond a race thing -- there's an Asian group amusingly named Rice Track. If it seems like some of these groups function as gangs, that isn't accidental. The real street gangs, we're told, respect the clown groups and mostly leave them alone. Good to see that entertaining kids can be good for your health and safety, as well as being fun and rewarding.

Spinning off from the clowns are the devotees of "krump," a more aggressive, warlike dance originated by guys with names like Dragon and Tight Eyez, who say they came up with the form for the benefit of kids who didn't want to play sports after school and had nothing else to occupy their time (legally) in the 'hood. A notable side effect of krumping appears to be the taking on of a younger protégé who might otherwise be at risk for delinquency. Krump is not just a dance but a lifestyle, one so hip that it changes every day, and anyone who goes a day without doing it can be clearly identified as behind the times and uncool.

Tommy the Clown and his apprentice Larry like to make fun of krump, seeing it as sloppy and chaotic compared to clowning. The stage is set for a showdown of styles, and the film builds to a head at BattleZone V, a dance-off judged by the audience that pits the krumpers against the clowns. But LaChapelle's a photographer, not a storyteller. Which is why, even at 84 minutes, the movie doesn't necessarily feel short -- musical montages replace narrative in way too many spots.