Dance This Mess Around

What a bad feeling -- and taste -- Honey leaves behind. 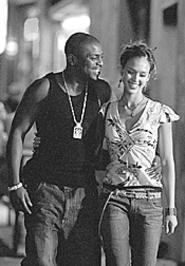 Honey is one of those movies you will see, swear you've seen before in several other guises and incarnations, and then immediately forget you ever saw to begin with. Its story, about a would-be dancer trying to plot her escape from mean streets (or mean movie sets and back lots), has been told countless times, usually in films starring John Travolta or Jennifer Beals . . . or Kevin Bacon, if one feels compelled to add Footloose to the estimable genre of movies about people who just gotta dance! The entire enterprise feels decidedly retro; were it not for the bumpin' soundtrack assembled on the hip-hop factory line, you might mistake this for something made for the cut-out bins of 1978 or 1983 or 1991. Why it exists at all is a mystery for the ages. Certainly, it's not because there was an audience clamoring for a Jessica Alba star vehicle; nobody watched her on Dark Angel for two years, and that was free.

Alba's the latest in a long line of long legs to mistake dancing lessons for acting lessons -- though, to be fair, she did once study with David Mamet and William H. Macy, so there's the thing, see, about that thing, unless that thing is acting, see. She works her abs off as Honey, a bartender by night and record-store clerk by day, who has the mighty aspirations of working in the music-video biz as a choreographer. And if you can root for that in your movie protagonist, well, you'll pretty much cheer for anything. Would that Missy Elliott, who has charisma to burn and smoke, had been cast in the lead; she's teased in the credits, but appears far too late in the film to redeem it.

Ah, but Honey has her, ahem, sweet side. When not picking up dance moves from asphalt ballers -- director Bille Woodruff, maker of videos for, among others, Britney Spears and OutKast, finds big drama in Honey's dancer's block -- she's teaching dance moves to the kids at the local rec center, run by her mother (Lonette McKee, once a Spike Lee regular, now relegated to furrowing brows). Her class, multiculti and decked out in designer threads, looks like something out of an American Idol casting call; you keep expecting a Broadway producer to stumble into their class and sign them up for a touring production of Rent.

Among the local toughs she convinces to join her class is Benny (Lil' Romeo), whom she meets one night outside a local club, bustin' break-dance moves in an alley, which lends a decidedly Electric Boogaloo vibe to the proceedings. At first, Benny thinks Honey a fake and fraud; she thinks he's just afraid of not looking tough in front of his little brother and the drug dealer he works for on the side. It's Benny who inspires Honey to buy a dilapidated warehouse and turn it into a dance studio for the neighborhood, which she can't afford to do until they put on a show at an abandoned church. Andy Hardy just called and wants his movie back.

Honey will satisfy those who found Flashdance, or the J. Lo video it inspired, too hard to follow. On the 20th anniversary of Flashdance's release, Honey plays like a remake, down to its protagonist's involvement with a moneyed boss -- though in this case, the boss in question, video director Michael Ellis (David Moscow, not so cute as when he was little Tom Hanks in Big), goes from prince to prick for no reason other than to advance a stalled plot. Honey, plotted like an after-school special, adds a second love interest: Mekhi Phifer's barber-shop-owning Chaz, who eschewed the thug life for the chance to cut heads in the old neighborhood.

If Flashdance heralded the dawn of cinema as music-video montage, Honey boils down the formula to its most base elements: It possesses the story arc of an afternoon spent watching BET or MTV2, and winds up as little more than an assemblage of clips for, among others, Jadakiss and Ginuwine and other hip-hop chart-toppers connected, as loosely as a pair of Triple 5 Soul baggy jeans, by its tattered tale. Even the scenes set outside the soundstages look framed and lit and soundtracked to resemble a music video -- to the point that, for a good half-hour, you can't even tell what's going on, who's related to whom, or even what they're saying over the din of boomboomboom coming out of a nightclub's P.A. system. (Not that it matters much; the dialogue could have been recorded in Esperanto, and still the audience could have kept up.) It's a wonder that Honey wasn't funded by Sony and Interscope and AOL Time Warner, among the labels represented here by artists whose videos Honey is hired to choreograph. Certainly it exists solely to sell a soundtrack; the movie, like most made for teens, is well beside the point.