Three exhausting plays are served up with varying rewards. 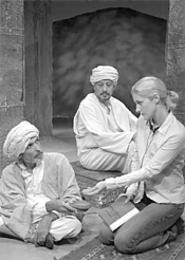 Cleveland Public Theatre's Blue Sky Transmission, auteur Raymond Bobgan's ode to Eastern-influenced forms of stomping and chanting, will likely glide over the heads of the uninitiated; for those with Neil Simon theatrical palates, it'll be about as appealing as octopus at a picnic.

The work's source material, The Tibetan Book of the Dead, is a centuries-old self-help manual authored by a Tibetan monk. It's basically a compilation of the easiest ways to book passage to the next plane of existence.

Bobgan and his coterie performed their own brand of miracle to wangle a $200,000 grant for this fantasia about a female tycoon who, after succumbing to an embolism, is coerced by a handful of spirit-world yoga instructors to cancel her earthly appointments, dump her family and cell phone, and ascend to a more rarefied spiritual plane. It all plays like a new-age variation of the third act of Our Town as reconceived by Martha Graham, with Grover's Corners as a high-rise condo, Emily a career woman with attitude, and the Great Beyond taking on the look of a Chinese New Year celebration.

Bobgan, who in the past has staged reinterpretations of Roman texts and other ancient works, has long been interested in dramatizing myth and ritual. And every time, viewers unfamiliar with the source material have little hope of understanding what's happening. Blue Sky Transmission, a work that's coherent almost half the time, is a marked improvement.

Yet it's a visually stunning show, filled with surrealism and evocative theatrical effects. The accompanying music by Halim El-Dabh imbues the work's 90 minutes with the susurrus of rushing waterfalls and the lilt of tinkling cow bells. The 10-member company includes actress Holly Holsinger, Bobgan's wife, who radiates blinding intensity as the tempestuous spiritual tease; she remains the director's greatest asset.

The works of award-winning playwright Tony Kushner are invariably both satisfying and taxing experiences. Those who witnessed Dobama's towering production of his Angels in America staggered back out onto Coventry Road with a greater awareness of AIDS and gay sex positions, as well as McCarthyism, metaphysics, and the habits of angels.

Dobama's equally splendid realization of Homebody/Kabul finds Kushner still to be Broadway's most self-indulgent genius: Sitting through one of his plays feels like struggling through The New York Times crossword puzzle. His latest work plays like a Graham Greene thriller and equals Gone With the Wind in running time. It chronicles a father and daughter's search for their wife/mother in a politically corrupt and dangerous backwater country. The play opens with an exhausting 75-minute Beckett-flavored monologue, then proceeds to drag its captive audience through a wearying symposium touching on such subjects as Afghani politics since Alexander the Great, Esperanto, the works of P.G. Wodehouse, and enough esoterica to fill a Jeopardy! Tournament of Champions. Joel Hammer, who also directed Dobama's Angels in America, again shows his gift for making difficult works work.

The first act of Beck Center's Parade culminates in a chorus of enraged Southerners breaking into a jubilant dance to celebrate the unjust "guilty" verdict of a despised Yankee Jew accused of raping and murdering a 12-year-old flower of the Confederacy. But what should be a horrifying moment instead is as stirring as a rendition of "God Bless America."

Parade has every right to be a cynical and nihilistic exposition of a bitter, defeated South and an innocent man's destruction at the hands of a lynch mob. Instead, it endures as a romance about a rekindled love between a condemned husband and his fiercely heroic wife, an ode to lost innocence. Even more important, it rekindles our love for the vast possibilities of the American musical, thanks to the soaring Americana that makes up Jason Robert Brown's music and lyrics, and the sound emotional shorthand of Alfred Uhry's (Driving Miss Daisy) book.

Just as impressive is the lavish professionalism with which Beck Center has re-created this mutilayered epic. Director Scott Spence has grown from a mediocre presence to a sure-handed pro. His luminous cast, large enough to populate The Ten Commandments, is led by Keith Gerchak as a leather-lunged Leo Frank, the martyr at the center of the story. Sandra Emerick, once considered a specialist in playing jazz-baby tarts, has developed a beatific glow as Leo's determined wife.