Playhouse Square's rousing 42nd Street is paved with dreams, divas, and a blur of tap shoes. 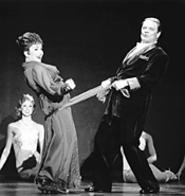 Take the most clichéd story in the last hundred years of musicals, tart it up with garish sequin-studded costumes and painted tableaux, then fill the stage with obsessive-compulsive tap dancers, creaky 70-year-old tunes, and lots of overacting. You call this entertainment? Oh my, yes! Because the mother of all backstage musicals, 42nd Street, has infused the Palace Theatre with enough leg-pumping, heel-pounding, toe-tapping energy to power the Northeast Ohio grid for the next six months.

Fair warning: You'd best set down that heavy satchel of irony you carry around before reading further. This is a show built, unapologetically, on the hoariest of Broadway bromides: that of the chorus girl stepping in for the fallen lead and becoming . . . fabulous. Yes, one character actually says, "You're going out there a youngster, but you've got to come back a star!" So much for plot.

But 42nd Street isn't about story line; it's about the thunderous wave of sound created by more than 40 dancers machine-gunning their close-rhythm tapping. It's about timeless Harry Warren and Al Dubin songs, which make up in addictive melodies what they lack in sophistication (among them: "Lullaby of Broadway," "We're in the Money," "I Only Have Eyes for You," and the sax-drenched title song). Most of all, it's about simple escapism, in the style of the 1930s "Gold Diggers" flicks.

All the stock characters from the original 1933 movie musical are here: Hard-assed, soft-hearted director Julian Marsh (slick and imperious Patrick Ryan Sullivan) wants to make his show, Pretty Lady, the best darn musical ever. But it's the Great Depression, and he must hand the lead role to fading diva Dorothy Brock (Blair Ross in a zestfully campy, tooth-clenching Cruella DeVil turn) because she's playing slap-and-tickle with the rich Texas rube who's funding the show.

Enter the ingenue, Peggy, gamely tapping her way into and out of conversations backstage, trying to get noticed. From the outset, she is pursued both by the show's libidinous tenor, Billy, and an Appointment With Destiny -- which arrives on cue, when Dorothy breaks her ankle. After some more denture-gnashing, Dorothy relents and confers upon Peggy the classic opening-night send-off to an understudy: "Go out there and be so swell, you'll make me hate you!" You know the rest.

Happily, the producers and director Mark Bramble know how to use plenty of eye candy to make the predictable fascinating. There's a dazzling cascade of costumes that must have seriously depleted the country's reservoir of rhinestones. And the stage is filled with cleverly designed backdrops and scrims, such as a forced-perspective montage of New York, showing Broadway marquees with skyscrapers spearing into the clouds.

This production employs Gower Champion dance numbers from the Tony Award-winning 1980 Broadway production and embellishes them with the contributions of touring-company choreographer Randy Skinner. The result is a show that never stops gyrating. Intriguing bits include a Busby Berkeley-style number, in which we see the female dancers reflected from a bird's-eye view, and a silhouette dance with rolling stage lights.

There are also moments when the innocence of the 1930s setting amusingly bumps up against our more liberated contemporary culture. In the "Shuffle Off to Buffalo" scene, set on a train, a bunch of nightie-clad girls are paired off in sleeper compartments as they primp and trill. In the 1930s, the assumption would be that all the husbands are off brushing their teeth. The 2003 Rosie O'Donnell take: It's a lesbian love train, on its way to a gay-pride parade in upstate New York.

Undeniably, the real stars of this show are the group dance numbers, whether it's four girls hoofing their way to lunch at the automat or the entire company rattling the Palace floorboards in the exhilarating finale. Anyone who can resist the visceral pull of these percussive numbers must have had a rhythm-bypass operation.

As Peggy, Catherine Wreford kicks up a storm and is perfectly believable as the ingenue, although she is less persuasive as the electrifying headliner on the Great White Way. Robert Spring brings capable singing and dancing chops to his role as hot-to-trot Billy, but a limited range of facial expressions hampers his ability to sell his numbers. At times, he seems to be wearing an unchanging smiley mask. Spunky comic support is provided by little Patti Mariano as Maggie, the spark-plug songwriter, actor, and all-purpose noodge of the Pretty Lady cast.

Some may cringe slightly at the dated, non-PC aspects of the show -- girls mincing about in sparkly beige body suits while gazing into hand mirrors and cooing the ditty "Keep Young and Beautiful (If You Want to Be Loved)." But this ain't Crossfire; this is old-time show biz, sweetheart. Relax and enjoy.