Dancing in the Seats 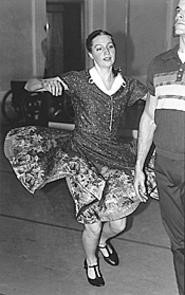 Hernando Cortez didn't want a bunch of moldy oldies cluttering MoonDogg, VERB Ballets' suite of dances that celebrates early rock and roll. He wanted to show the music's primitive, seamier side -- before poodle skirts became synonymous with 1950s pop. So he dumped the Fonz-approved hits and went with Etta James's "Roll With Me, Henry," the Robins' "Out of the Picture," and Bill Haley & the Comets' "When the Saints Go Marching In."

"I wanted to convey the underground, grass-roots formation of rock and roll," says Cortez, the troupe's artistic director. "I wanted to stay away from the Grease musical style. This version is a little grittier, a little more urban. It's darker."

Cortez conceived MoonDogg when he moved to Cleveland a little more than a year ago. "It's the birthplace of rock and roll," he says. "So I researched Alan Freed, the city, and the music." The finished piece, a fusion of nostalgia and contemporary dance, is an "abstract poem" in tribute to Freed, the local DJ who revolutionized rock radio and had a huge hand in bringing the noise public. With its evocation of mid-'50s style and culture, the show is a sexy, wildly frenetic throwback to a time when rock and roll was considered dangerous. "It's a little less saccharine" than most period pieces, Cortez says. "We even intentionally left the records [that accompany the dancers] scratchy, to give it an antique feel."

MoonDogg premieres at Tri-C this weekend and heads to New York and New Orleans, among other cities, next year. "It's a terrific dance party," Cortez says. "I really want people to feel like they can dance in their seats. I want them to feel that they're watching and listening to this for the first time, as if they were listening to the radio for the first time."