The guy behind "The Evolution of Dance" is about to bust a new move. 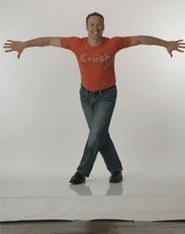 Judson Laipply is the kind of person who could only be a star in the YouTube era.

The gawky, pasty-faced 30-year-old looks nothing like a Hollywood idol. His jeans are a bit too short, his T-shirt too snug. Though his gelled hair is starting to recede, he still wouldn't look out of place on a playground.

But the Lakewood comic always made up for his lack of a look with his boisterous desire to entertain. He was known for lip-synching to Garth Brooks in the school cafeteria and busting out Vanilla Ice impressions on the baseball diamond.

"If there was a moment for him to perform, he'd be performing," says Corey Barnes, Laipply's former college roommate.

Which is how he became the guy behind "The Evolution of Dance" -- the most-watched video on YouTube.

In 2001, Laipply was working as an inspirational comic when he came up with the idea for his interpretive dance. Drawing from four decades of popular music, the moves ran the gamut from Elvis' famed pelvic thrust to Carl Douglas' legendary kung fu kicks in just six tidy minutes.

The routine killed at bar mitzvahs and bars. Inevitably, audience members begged him to provide a way to share it with their friends. So in April, Laipply put the video up on a then-little-known media-sharing website called YouTube.

And that is when he went, as they say, viral.

One month after he posted the video, Laipply's site began to garner attention. Seven people left comments, one of them writing, "This white boy can dance." His smooth moves had attracted 39,000 views.

But from those seeds sprouted hundreds of branches. One friend sent it to a dozen friends, who in turn e-mailed it to hundreds. Two days later, his page views shot up to 400,000. And the number kept spiraling higher, like a miniature National Debt Clock. Laipply could watch it explode in real time -- every time Laipply refreshed his browser, a couple thousand more people had watched him dance.

"It was completely unreal," he says.

By the end of November, Laipply's dance moves had been viewed by more than 34 million people -- bigger than the audience for the American Idol finale. He's been asked to appear on TV with Matt Lauer and Ellen DeGeneres. He was invited to dance on center court at the NBA Finals in Dallas. The Los Angeles Times dubbed him "YouTube's signature breakthrough artist."

"The craziest thing is that I never intended for any of this to happen," Laipply says, smiling. "I'd probably look a lot smarter if I said all this was planned, huh?"

Laipply owes many of his career breaks to chance. While attending college at Bluffton University in northwest Ohio, Laipply saw a motivational speaker named Dave Coleman preach to students about relationships and dating. I could do that! Laipply thought.

After the presentation, he struck up a conversation with Coleman, and in 2000, the man who inspired Laipply also offered him a job.

After his YouTube video exploded, so did the demand and price of his speaking engagements. Laipply now charges upwards of $9,000 per gig.

But he has no illusions about what people are coming for. "Everyone wants to see the dancing boy," Laipply laments.

A few months ago, he decided to change directions again. He and a partner are starting an online television network, dubbed "Judson TV." The goal is to spread inspirational messages to the masses. Call it Chicken Soup for the Web Surfer's Soul.

Grudgingly, Laipply has agreed to dance on the show.

The duo has already taped six weeks' worth of episodes, which are scheduled to air at the website judson.tv in January. In one, Laipply interviews the subjects of best-selling author John Grisham's new book. In another, he dances with Pedro from Napoleon Dynamite.

This time, the performances won't be on a grainy home video. He and his partner have teamed up with Google to produce the premiere.

A few months after Laipply's video broke, the unintentional celebrity got a call from executives in Google's video department. Google wanted to increase its video library and was looking for an act that would direct viewers to its site. Laipply would be the perfect poster boy. According to the deal they've penciled out, Google will have exclusive rights to the video for the first 48 hours. Afterward, it will be seen only on Judson TV.

Viewers, however, won't be able to catch a sneak peek of the new "Evolution of Dance II" video until early next year. At the moment, Laipply, with his new Hollywood mind-set, is looking for an advertiser to sponsor the video. He's also working on securing rights to the songs. As of now, he's thinking the new routine will include tunes like "My Girl" by the Temptations, "Vogue" by Madonna, and "Tootsee Roll" by 69 Boyz.

Even with so many fans, Laipply lives a relatively anonymous life. Because the original YouTube video was so grainy, people seldom recognize him. "No one's ever stopped me cold," Laipply says.

The closest he's come to fan adoration was after a recent reunion at Gahanna High School near Columbus. A student rushed up with a piece of wrinkled notebook paper and asked, "Will you sign this please?" After Laipply complied, the kid sighed happily and swooned. "I'm going to keep this forever."