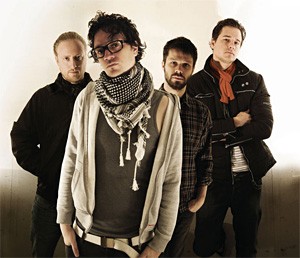 The Fashion's singer, Jakob Printzlau, claims that his Danish band "just is not that up on the dance-rock scene in America." Sounds funny, coming from a guy whose group is constantly lumped in with U.S.-based indie-rock dance-punk outfits like LCD Soundsystem and the Rapture. Then again, seeing that nostalgia for the genre is approaching its 10th anniversary and still going strong, the Fashion could very well have picked up those influences naturally — you know, from the original dance-rockers, who made music more than a quarter-century ago.

Still, Printzlau acknowledges the similarity between his band and all the other post-punk booty-shakers. It comes from a shared love of classic punk and post-punk groups, he says. "We don't try to look at what other bands are doing, but you're always going to sound like someone. Everything is circular. I can be inspired by a 10-year-old record, but also by something that's really new."

Every artist is, in one way or another, a product of his times. Occasionally, change can be radical — like when withered creativity is shaken off and replaced with something new. Other times, the change can be more subtle — like, say, a small shift in style or approach. It's these moves that define themselves as the very essence of what it means to be making music in a particular time and place.

The guys in the Fashion may not have sparked the whole dance-punk revolution, but they comfortably settled into a movement that's reshaped the concept of pop and alternative music over the past decade.

During that time, the Fashion has gone through its own transformation. Since 1995, three of the four members have taken part in other projects in various combinations — dabbling in everything from metal to industrial to punky pop. Their collective decision to settle on the Fashion's dance-punk sound was influenced by these projects.

"We're always up for experiments," says Printzlau. "Around 2000, we kind of settled around a poppy, outgoing rock sound. We were never really trying to hit a genre or tap into what's popular. Our success is, I suppose, tied to what else is out there, but we draw our influences from four really different personalities. We grew up on punk rock and metal, and a lot of us listen to hip-hop. With all of those influences, it sort of creates a genre."

The band's willingness to explore these different genres has made for some intriguing sounds over the years. There's a definite Beastie Boys-style hip-hop flavor to many cuts — which is something that distinguishes the Fashion from its contemporaries.

"We don't know shit about hip-hop," laughs Printzlau. Since old-school hip-hop often borrowed beats and grooves from post- and dance-punk records, the Fashion can be seen as bringing it full circle.

When pioneering funk-punk bands like Gang of Four and Delta 5 injected disco into their music, it was kinda soulless and almost always sexless. Sure, it was called dance-punk, but it wasn't all that easy to actually dance to. The Fashion's sinewy, muscular basslines and ethereal synth flourishes hit from the other side: They're sexy and full of motion. Most important, you can bust some serious moves to them.

All of this merging of musical styles — rock, dance, black, white — has been thinning out music's boundaries over the past decade or so. There's a reason so many hyphenated genres exist these days: Fans futilely try to label new bands with familiar definitions. But when an artist really doesn't sound like one thing or another, but maintains traces of many different influences, those hyphens can come in handy. That's why we have pseudo-genres like synth-drone-disco-dub-folk.

The Fashion is one of those hard-to-classify groups, but Printzlau shrugs at attempts to label it. "People are finding it hard to lump us into any categories," he says. "We're not claiming any connection." Look no further than the group's current tour with alt-punks Alkaline Trio for proof. The two bands have little in common. "Kids [come] out, expecting a punk-rock show," says Printzlau. "Most of the young kids are pretty open, but the punk-rock aesthetic rules the game."

Still, the Fashion has been using audiences' expectations to pull in new fans during each tour stop. They may not dig the Fashion at first, but after a few minutes, heads begin nodding and feet start tapping. "I think [crowds] really enjoy having a band on the bill that's not really what you'd expect," says Printzlau. "I really like the position of being able to go onstage and just explode and win people over.

"It's really funny to watch the looks on people's faces. They're like, What the hell is going on? What's this all about? By the time we're through with the first song, they've been won over."