Once home to fine dining, the Akron landmark has lost its sizzle.

May 25, 2000
comment
Palms Dining Room Tangier Resturaurant and Cabaret 532 West Market Street, Akron 1-800- Tangier Note:During the summer, the Palms Dining Room will be open for dinner on Saturdays only. Lunch and dinner will be served in adjacent Georgie's Bar and Grill 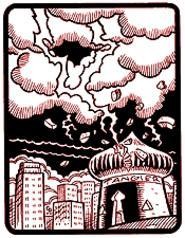 The two well-dressed, middle-aged women in the Tangier powder room talked as though they knew their way around a plate of food, and what they had just polished off hadn't pleased them.

"This place has really gone downhill," sniffed the first.

"I remember when this was one of the best restaurants in Akron," agreed the other. "But not anymore. Times really change, don't they?"

Indeed they do. When Tangier started life on West Market Street, just west of downtown Akron, it was a homey, 50-seat restaurant with a distinctive Middle Eastern touch, reflecting the background of its founder, Ed George Sr. For decades, Tangier was one of the area's few fine dining spots. However, in recent years, the focus has shifted from the Palms Dining Room to the facility's role as an entertainment and banquet venue, complete with a cabaret, a dozen private party rooms, and a lounge with weekend entertainment. Meantime, a new crop of upscale dining rooms has sprung up throughout the region, where food quality, preparation, presentation, and service are outstanding. And many of these newer spots are likely to provide a more satisfying dining experience than what guests can expect from this 46-year-old landmark.

Not that there weren't some high points to our two recent meals in the Tangier dining room. But items on the modest-sized menu of middle-of-the-road offerings like shrimp cocktail, prime rib, and marinated chicken breasts, with a few Lebanese-style dishes thrown in for good measure, included more than a few that were poorly conceived and carelessly executed.

Portents of trouble were abundant, even before the food arrived. First off, for those, like the legendary Ms. Garbo, who want to be alone, may I suggest the Palms Dining Room on a Thursday evening? Besides our waitress (who was out of there like a shot once we paid our bill), there was no one in sight in the 225-seat space when we made our first visit. On a subsequent visit during Saturday night prime time, the room was, comparatively, hopping with family groups, couples, and formally garbed young people doing the prom thing. Still, our waitress this night set a troubling tone when she cautioned us away from several possible selections with a shrug and a noncommittal "That used to be good, but . . ."

Fortunately for us, she didn't try to warn us off the kitchen's most successful endeavor: the venerable house specialty of Rack of Lamb Phoenicia, a five-bone rack that our waitress deftly carved for us at the table. As rich and succulent as any we have ever had, the medium-rare meat had a savory outer crust of herbs and spices that gave it plenty of flavor as well as a mouthwatering aroma. At $32.95, the dish was the most expensive item on the menu; if only the sides -- an oily rice pilaf, a few unremarkable green beans, and a slice of crisp, breaded-and-fried eggplant -- had been as impressive as the lamb, it would have been worth the high price.

The Authentic Mediterranean Feast had its ups and downs. The salad course included a portion of tasty tabouli, with lots of chopped parsley and the usual lemony dressing; a mildly flavored hummus; two nice, fat stuffed grape leaves with a moist filling of ground lamb, beef, and rice; a distressingly fizzy and bitter-tasting baba ghanoush; and plenty of cold, stale pita bread.

The main course was equally uneven. A sirloin tip beef kebab -- three overdone cubes of meat divided by slices of red and green pepper -- was so stringy and dry that it was mostly inedible. "Stuffed" eggplant turned out to be a few slices of tender vegetable asphyxiating beneath a heavy, sweet tomato sauce. A large, oval kibbee -- fragrant ground lamb, bulgur, and pine nuts -- had a nice flavor, but the crust was limp and soggy. The best of the lot turned out to be the kefta -- a dark, unpromising-looking patty of ground beef and lamb -- which was actually quite juicy and tender, although terrifically salty. Everything was mounted on a bed of that oily rice pilaf.

Despite its drawbacks, the Mediterranean Feast put us in the mood to ogle the restaurant's decor: an over-the-top interpretation of Middle Eastern style that seemed right out of The Arabian Nights. The kitschy museum-meets-funhouse motif extends from the sky-blue dome that tops the lavender-and-orange exterior to the lobby's massive arched doors and intricate tile work, and into the main dining room, with its line of faux palms, burbling fountain, velvet curtains, and salmon-and-green color scheme. Certainly, the ambiance isn't to everyone's taste. But truth be told, the wild colors, dueling patterns, and huge spaces give the restaurant a kind of theatrical flair that, judged fondly, can be fun. Another entertaining and nostalgic part of the gestalt is the impressive collection of autographed photos that line the walls of a long hallway leading to the private banquet rooms. The informal gallery displays pictures of hundreds of celebrities whom the owners have welcomed over the years.

Another featured entrée -- the Sweet Heart Special, with a petit filet mignon and two scampi -- was pretty good. The filet, ordered medium, was fairly tender and flavorful, while the scampi had a nice, buttery taste, but a dry texture that made us think they had been frozen. Sides included a few slices of tender, well-seasoned zucchini and yellow squash, and a mound of homey garlic-mashed potatoes.

However, our final main dish selection, Honey-Pecan Chicken, was the low point. Described on the menu as a boneless, sautéed breast, simmered with honey and pecans, and served with vegetables and rice pilaf (natch), what we got instead was a very nice, plump boneless breast that -- along with a smattering of green beans and the ubiquitous rice -- was floating in a deep pool of sweet, sticky brown syrup with a salty, cloying taste that obliterated any other flavors that the meat, beans, or rice might have offered.

Appetizers included that signature Akron dish: crisp-crusted sauerkraut balls served with a side of thick honey-mustard sauce. While the tart little hors d'oeuvres are made in-house, they are frozen and then reheated to order. Unfortunately, this batch didn't get enough time in the cooker and came to the table with soggy, undercooked centers. A crock of dark-brown French Onion Soup was better, with a thick coating of melted Provolone, lots of bite-sized croutons, and plenty of mostly tender onion slices. But after polishing it off, we were taken aback by our waitress's question. "Was that soup all right?" she asked us doubtfully. "They shoot it out of guns, you know, like with the soda in the bar." (We didn't know, and Executive Chef Rick Keyes was aghast at the suggestion, assuring us the soup was made in a conventional, nonviolent manner.)

Tangier has a tempting-sounding dessert menu, and after our less than wonderful meals, we hoped for a sweet ending. Angel's Tip -- a dessert of broiled angel-food cake -- sounded especially appealing, with its toppings of French vanilla ice cream, Godiva hot-fudge Kahlua sauce, and roasted coconut. But the truth was stranger than the menu's fiction. On our first go-round, the huge wedge of cake came to the table icy cold, apparently straight out of the cooler. The coconut was absent ("We had a big banquet today, and the kitchen's out of everything," the waitress explained), and rather than actual hot fudge, the plate was crosshatched with fine drizzles of a bittersweet chocolate sauce that, all in all, might have added up to a teaspoon of topping. On the plus side, someone in the kitchen must have felt sorry for us: Instead of one scoop of French vanilla ice cream, we got two scoops of vanilla and two scoops of an excellent dark chocolate that helped sooth the sting.

We decided to give the sweet another chance on our second visit. But things got worse. Rather than a wedge of angel food, this time we got three cubes of cold, chewy sponge cake. Again, there was no sign of the coconut (and this time, no explanation), and the few chocolate driblets were again of no gustatory significance. And on this occasion, piling disappointment upon bitter disappointment, there was only one scoop of French vanilla ice cream and not a single bit of chocolate. All this, for a rather astonishing $6.95.

Another featured dessert, a classic Napoleon, was equally unappealing, with soggy puff pastry dividing layers of heavy, greasy "Bavarian cream." We also hoped to try a serving of Chocolate Suicide Cake, which our waitress said wasn't made in-house, but was still good. Alas, she returned in 10 minutes to tell us it was not to be. "It's frozen so hard we can't cut it," she shrugged.

All of which might be amusing in an inexpensive, home-style restaurant. But when a couple finds themselves dishing out nearly $100 for dining of this caliber, I suspect they won't be laughing very long.