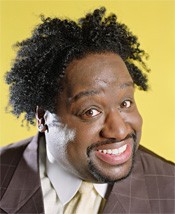 It sometimes takes a few years for a comedian to find his voice. After 20 years, Bruce Bruce claims he's still looking. "There's something I learn every week onstage about me," he says. "But it's a good thing. I'm still having fun and entertaining people, and making a decent living. So I'm cool." Bruce can trace his earliest audiences to the dudes who worked on a loading dock with him in his native Atlanta. This weekend, he'll yuk up relationships, describing how he tells a date that he won't go to a mall to shop with her. "I tell a woman, 'I'm very busy. I stay on the road a lot. So you have to understand that,'" says Bruce, whose screen credits include roles in Larry the Cable Guy: Health Inspector and Who's Your Caddy? "If you don't, they start trippin' on you." The presidential campaign has also earned a spot in his repertoire, as he stumps for Barack over Hillary. "I think it's all a bunch of bull crap. I don't think, because he's black, he deserves to win. I think he deserves to win because he's the man for the job right now," says Bruce. "He's on top of his game." Showtime is at 8 and 10:15 p.m. today and tomorrow, and 7 p.m. Sunday at the Improv, 2000 Sycamore Street on the West Bank of the Flats. Tickets are $26. Call 216-696-4677 or visit www.clevelandimprov.com.
April 11-12, 8 & 10:15 p.m.; Sun., April 13, 7 p.m., 2008