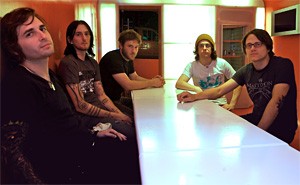 The hardcore veterans of Darkest Hour play metal that's popular with people who generally don't like metal. Songs like "A Paradox With Flies" balance out death-metal growls with sweeping emo melodies. And make no bones about it: They shred, Swede-metal style, with harmonies that ring for hours. Their new album, Deliver Us, was produced by Strapping Young Lad frontman Devin Townsend, who says they're the real thing: "They wanted to take not a more commercial angle, but a more accessible angle," Townsend told Scene. "So I think in all of this, we were able to streamline their work in terms of something that is ear-friendly, but not commercial in terms of a pop record." Plus, if you think the choruses are big, that's nothing compared to the drums, which sound friggin' huge.