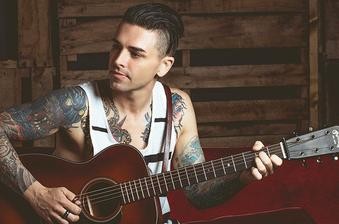 Thanks to some great exposure on MTV, Dashboard Confessional was a hugely popular alternative band of the 2000s. The band’s second album, 2002’s The Places You Have Come to Fear the Most included the trademark single “Screaming Infidelities.” Their third album A Mark, A Mission, A Brand, A Scar went to No. 2 on the Top 200. The group even sold out Madison Square Garden on its last full band tour.

[jump] But in 2010, the band called it a day. Singer-guitarist Chris Carrabba subsequently started singing with the folk-y indie rock group Twin Forks. That band has enjoyed a certain amount of success – earlier this year, it played mid-sized venues with Counting Crows.

And yet, Dashboard continues to be in demand. Earlier this year, when country mega-star Taylor Swift needed someone to play her best friend’s birthday party, she gave Carrabba a ring.

“It’s fun to play music with my friends,” Carrabba says of the experience in a recent phone interview from his Nashville home. “It’s like going to a great, incredible birthday party for a really great and incredible person. It happened to be hosted by our friend who happens to be incredibly famous.”

Carrabba has lived in Nashville off and on for a few years but has called it his permanent home for the past year. While Dashboard’s emo music is a far cry from country, Carrabba has great respect for the genre’s many songwriters.

“For me there was already an influence on my music from older country music,” he says. “I’m guessing that most songwriters who are storytellers take an influence. Once it was cool and then it was uncool. Whether it’s cool at the time or not, they’d tell you they were influenced by country musicians. How could you not be influenced by lyricists like Kris Kristofferson or Steve Earle for me, who’s a masterful one.”

“Especially Willie Nelson,” he says. “Not only is Willie Nelson a phenomenal talent. There’s little difference in terms of lyrical prowess and melody and all that and what Paul Simon has to offer and what Tom Petty and what Dylan has to offer. He’s just as masterful.”

Initially, Carrabba sang with the indie rock band Further Seems Forever, a group that formed back in 1998. While still a member of that band, he began experimenting with his own tunes. It was a “growing pile” of tunes that just weren’t right for Further Seems Forever. When Further had some leftover studio time, Carrabba decided to seize the opportunity to record some of his demos.

“It was Amy Fleisher who ran Fiddler records who said, ‘You have to record this,’” he recalls. “I had a handful of champions who I was brave enough to play them for. I thought if they’re impressed, then there’s something to this. I wasn’t comfortable doing it and my big excuse was that I didn’t have a guitar to properly record an album with. Amy said, ‘Fuck this. I’m going to get you a guitar.’ She went out and bought a $200 guitar. That was huge. When you talk about putting money where your mouth is, that’s it. If it weren’t for her, I wouldn’t have set foot in a studio.”

After he cut the record, 2000’s The Swiss Army Romance, he didn’t think he’d release it.

“It was just a great exercise in confidence building,” he says. “There was this moment born out of anonymity and inauspicious nature. When no one is going to hear it, you say things that might be censored from other band mates. Amy wanted to put the record out and the Further guys were encouraging me. They thought it was really good. They talked me into putting it out on Amy’s label. Further had an EP out and were working on a full-length.”

He started selling copies of that debut out of his van and he began playing shows. The confessional music really took hold with fans.

“There was all this great intrigue surrounding the beginning of Dashboard,” he says. “There was my own intrigue. I didn’t know how the hell people knew it existed. Then, it gets big enough. It was not an overnight success but what happened was the sing-a-longs. It takes years to become an overnight success and it really did. I was selling CDs out of my trunk before we got in the magazines. By the time we got in those magazines, there was this euphoric feeling.”

Released respectively in 2002 and 2003, The Places You Have Come to Fear the Most and A Mark, a Mission, a Brand, a Scar really connected with fans. Carrabba says the key was staying true to the lo-fi approach he took on his debut.

“I knew the scene I came from and I wanted to honor that,” he says. “We made a decision to go with Gil Norton who had made these great Pixies record and had made The Colour and the Shape with the Foo Fighters. He also made Recovering the Satellites for the Counting Crows. That was special for me. I loved the Pixies, and Foo Fighters blew everybody’s doors off. Here was the Counting Crows following up their gazillion-selling perfect record. I’m in awe of their first album. They made this record with Gil Norton and it had these teeth to it. I knew this was the guy who could take a band like mine and make sure not to let the teeth get worn away. I think he recognized the importance of that.”

Since reuniting this year for a summer tour that pairs the band with '90s rockers Third Eye Blind, Carrabba says the band is “fucking on fire.”

“It’s better than it’s ever been,” he says. “There’s some new energy but I think these songs are now new for me. I can play things now that I couldn’t play then. There’s this whole fiery thing. Bassist Scott Schoenbeck and I don’t even have to communicate. When you’ve known somebody as long as I have, I’m a disciple of his and bass playing to me is Scott Schoenbeck. We get in a room together and it didn’t take but an hour for it to light up. I don’t know what we’ll do when it comes to the shows, but it wasn’t loud enough. We brought it in more amps. I’ve been playing acoustically but as soon as there was heavy drums and this remarkable thing called distortion the only request I had was for more.”