Vices were many for guitarist Dave Navarro, who has lived to tell his lascivious story. 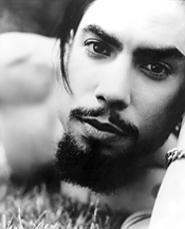 Three years ago, Dave Navarro's enormous house in the Hollywood Hills was home to drug dealers, crack whores, and rock stars. When Navarro installed a commercial photo booth, he used it to document his visitors -- glamour girls and pizza boys alike -- and some of those photos were printed in a recent issue of Spin. They include pictures of Navarro, guitarist for Jane's Addiction and the Red Hot Chili Peppers, fondling voluptuous women and making funny faces for the camera. His tales of shooting up with other rock stars and taking limo rides to the Playboy mansion are extreme, even for rock and roll. In terms of decadence, Navarro's life was as wild as it gets.

"Oh God, I never really saw any of that stuff," says former Warner Bros. publicist Ken Phillips, who was representing Navarro at the time. "I probably shouldn't comment on any of that stuff, because he wouldn't be too thrilled by that. I'll just say it was a trying time, but I don't want to get into any specific things."

It's a period Navarro, who is now clean and reportedly engaged to Baywatch babe Carmen Electra, has moved beyond. "That's not where he's at now," says Bobbie Gale, his publicist at Capitol Records, in an attempt to steer us away from asking too many questions about Navarro's past excesses. But the debauchery has been chronicled not only in Don't Try This at Home: A Year in the Life of Dave Navarro -- a book co-written by rock journalist Neil Strauss about Navarro's life in 1998 -- but also in the songs on Trust No One, Navarro's first solo album, which came out two months ago.

He says he's not troubled by reliving that time through his music. "The truth is, I don't necessarily revisit those feelings. That's the beauty of the creative process. I can purge those feelings. The bright side is to turn a painful experience into something joyous. Even though there are some dark expressions on the album, it's ultimately joyous to learn that you're not alone if you are, in fact, suffering."

Navarro, who was born and raised in Los Angeles, says his childhood was "pretty normal" and he had "loving parents." He experimented with drugs while in high school, but doesn't know if he developed an addiction then. "I think I've always been addictive," he says. "Whether it's music or the gym or PlayStation. I'm gonna do it till I can't do it anymore." In his teens, he saw the film Tommy and identified with the main character as "a child having his own set of problems." He learned how to play guitar so he could channel his frustrations into music. After a short stint in a speed-metal band, Navarro formed Jane's Addiction in the mid-'80s and introduced edgy, alternative (before it was even called alternative) music to a scene dominated by harmless hair-metal and new-wave acts.

"It was probably the single most rewarding experience of my life," he says of his days with Jane's. "I learned how to be a player with other great players. I learned how to harness my creativity and develop a craft I've been able to do into my 30s. It was basically a key factor in giving me the life I have."

Playing with Jane's not only gave Navarro a reputation as a great guitarist, but it also provided the monetary means for his decadence. With the money from platinum album sales and sold-out tours, Navarro could afford his choice of Heidi Fleiss-supplied prostitutes and sexual escapades with the likes of super-groupie Pamela Des Barres. Many of these encounters are documented in graphic detail in Don't Try This at Home.

The excerpt that ran in Spin "was a bit disturbing," says Phillips. "But it's a good synopsis of what it was like. It's very extreme, but it's true. I'm surprised he would reveal so much."

The book was supposed to come out simultaneously with the album, but has been indefinitely delayed. Gale says it's because the book is "inaccurate," but Navarro says the excerpt printed in Spin was completely accurate, and that advance copies sent out were just another version of a book that has gone through some 30 drafts. (Strauss was on vacation in Yugoslavia and unavailable for comment.) With a solo tour and a reunion tour with Jane's Addiction slated for this fall, Navarro isn't sure when he'll get to revising it once more. He admits the album title Trust No One, a reference to "a typical old-school tattoo slogan that sailors used to have," is no longer a motto by which he lives.

"I don't know what it is that leads people down certain paths," he says. "For me, I was always very independent and did what I could to swim against the stream. I think maybe some of the streams that I swam through weren't necessarily the healthiest. There's a lot of cynicism and dark humor attached to [my music], and I don't know if that translates. But then, who really cares?"