James Van Der Beek gets off, literally, on screwing with his image 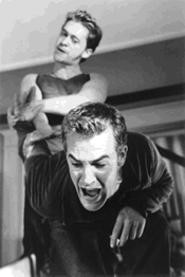 And to think, from 7 to 8 p.m. every Wednesday he's such a nice kid--solid, ambitious, clean-cut, respectful, on his way to becoming a first-rate filmmaker, about to turn his best friend into his girlfriend (again). If he were that other guy, he'd have screwed her and dumped her five years back; today he wouldn't even remember her name--Jody, is it? Julie? (Damn, what is it?) But you know him not as Sean Bateman, only as Dawson Leery, that kid with the sunshine smile and eyes as bright and shiny as all of Capeside. You just can't imagine him as this other guy, this Sean--the one with eyes that reflect only himself, eyes as dead as those of a corpse, eyes that bore a hole through you so he can better tap your heart and drink its contents. You can't see the golden boy tarnishing his image. Dawson Leery, the brother of a serial killer, an American psycho? Dawson Leery, coke pusher and back-door man? Yeah, good luck with all that.

And because no one else could imagine it, either, James Van Der Beek came awfully close to killing writer-director Roger Avary's dream of turning Bret Easton Ellis' 1987 novel The Rules of Attraction into a film.

Avary, a possessor of an Academy Award for his contributions to the Pulp Fiction screenplay, had read the book, a dense bit of work set at a Northeastern liberal-arts college featuring two dozen narrators all speaking-screaming-shouting in the first person, and spent nearly a decade reconstructing the novel into a remarkable screenplay. He did not own the rights--no one did, as it turned out--but that didn't stop him from banging out a script and putting it in his drawer. Only after producer Greg Shapiro read it did Avary start approaching studios about financing his dream. First he went to the now-defunct Shooting Gallery, where it was embraced by a female acquisitions exec, then to Fine Line, which suggested an unlikely lead: "The Beek," as Avary sometimes likes to call his star.

It was good timing. Van Der Beek had long been on the lookout for a role that would allow him to separate himself from Dawson. Time the boy took it like a man. When his agent gave him the screenplay for The Rules of Attraction, he discovered what he craved: Sean Bateman, the anti-Dawson.

"It's not like I'm trying to destroy Dawson or anything like that, but, yeah, I'm an actor--a young actor," he says from the Wilmington, North Carolina, set of Dawson's Creek, which begins its sixth and final season this week. "I'm 25. I don't wanna retire yet. I have a lot of instincts that just aren't appropriate for 8 o'clock on a network, ya know? This is a completely different character--the exact opposite of the one I play on TV--and the idea of playing it was thrilling. There's only so much appropriate for 8 o'clock. And especially as the characters on Dawson's Creek get older, now they're in college, this is the other side of college life. Dawson's Creek is a very romantic show. They're kind of idealistic people. Rules of Attraction is about people who make the wrong choices."

At first, Avary figured Van Der Beek as the wrong choice; no way was he interested in making so explicit and pointed a film using kids from the WB. Might as well film it using hand puppets. He'd be up Dawson's Creek without a paddle. Says Avary, speaking with the same machine-gun tongue used by his ex-video-store colleague Quentin Tarantino: "I had the same reaction most people seemed to have had: 'James Van Der Beek? Are you kidding?'" Then he met with Van Der Beek and found not a Teen People icon, but an actor of astonishing depth and range--the kind of guy you want to love but end up almost fearing, a succubus in Banana Republic clothing. He had his Sean Bateman, and for the first time in 15 years his dream became tangible. In Van Der Beek's eyes, Avary could watch his movie come to life. It did not hurt that Avary was also a big fan of Varsity Blues, in which Van Der Beek had played a Texas high school quarterback with balls made of pigskin.

"I went ahead and agreed to meet with James, and from the minute I met him and he took his glasses off and I looked into his eyes, I saw something in him I hadn't seen in the other actors I'd been meeting with," the filmmaker says. "Most of the other actors could easily play dark and, ya know, soulless parts, but what James had was this incredible kind of puppy-dog charisma that has made him a...I don't know what you'd call it...a cultural icon, a teen idol. I looked into his eyes, and James had this kind of capability for cold emptiness, almost doll-like eyes...From that point on, I just knew it had to be him, and we fought and fought. I faltered for a couple of weeks. There was one point where I started realizing nobody wanted to make this movie with James."

It turned into the damnedest thing, watching people with the cash back away from such a sound investment: Dawson goes to college and has lots and lots and lots of sex. Money in the bank, right? Unh-unh, no way. That's what they kept telling Avary. That's what they kept telling Van Der Beek, who had tried once before to shake his image--in Todd Solondz's Storytelling, where Dawson took it up the creek--and found his work on the cutting-room floor.

"A lot of people were not open to the idea that I could do it," Van Der Beek says of Rules. It's a surprising revelation, perhaps only to those who have seen the movie, in which he displays an astonishing capacity for depravity--a bottomless pit for it, actually. Tell him you can't imagine anyone else in the role, and he expresses genuine surprise and delight.

"Really? Well, God bless ya," he says, laughing. "I wish more people thought like that. Everybody from producers to other peoples' agents and managers were really just unwilling to believe that I could do it. At the beginning we ran into a lot of resistance. And then there were some really silly things, like the first time it fell apart ultimately because the foreign financiers were worried about how it would syndicate on European television. You're going, 'What?'"

Finally, Avary went to Lions Gate Films and begged for whatever spare coin the studio could toss his way. And by the time he assembled his cast, he realized he'd handed over his Rules to a handful of refugees from the WB and other TV series: Jessica Biel, one of God's favorites up in 7th Heaven; Ian Somerhalder and Kate Bosworth, who never had the chance to grow old on the WB's ill-fated Young Americans; Jay Baruchel, who had but one semester on Fox's Undeclared; and Fred Savage, a long, long way from his Wonder Years as he lounges around in his tighty-whities and shoots smack between his toes. They're debauched and debased, children set free in a world of Dressed to Get Screwed parties where the only decisions are who to screw and where. And if the movie feels a little buzzed--like it's had, oh, a kilo of coke shoved up its nose--it's because, at long last, actors trapped in the tiny box were given permission to go nuts, lose their shit, make a mess and let Avary worry about cleaning it up later.

"I was worried at first when I decided to go with the young TV-actor, WB types," Avary says. "Then I discovered that these kids have an amazing amount of talent, because they've been working so much. They're just shackled because they're not given the best material, because the material is cranked out. So give them freedom and give them good material, and they cut loose because nobody's ever let them do that. They go wild, and it's fantastic to watch. I would work with any of these actors again in a hot second. I think they were all brilliant."

They are; they really are. Whatever the movie's flaws--and in the end, most of Ellis' novels are social criticisms that wind up playing like R-rated just-say-no after-school specials--you can't fault the performances. They're so sharp you could cut a line with them, so intoxicating one shot gets you hammered. Van Der Beek especially proves himself the real deal, good enough to show up in films to which they do not hand out MTV Movie Awards. It is time for him to move forward, graduate from television, kiss Joey goodbye. The transition has been made; this is not your ninth-grader's actor, not anymore.

"Sean Bateman was the most complex, most interesting character in the best unmade movie I'd ever read," Van Der Beek says. "He's basically an emotional vampire trying to find a soul. He's a predator, and he's not concerned about being a nice guy. He had this horrific upbringing, but at the same time what he wants most of all is to try to really feel emotion and to really fall in love and experience it, and he's petrified that he's not gonna be able to, and that makes him even angrier. But he's fighting for something great and kinda noble at the same time; he just doesn't go about it in the right way. As far as likability, none of that even enters into it. I certainly felt like I was being turned loose for the first time in Rules of Attraction, and there's kind of that thrill knowing that nobody's seen me do anything like this. This is gonna be a surprise."