How a weird singer-songwriter scored the year's unlikeliest hit. 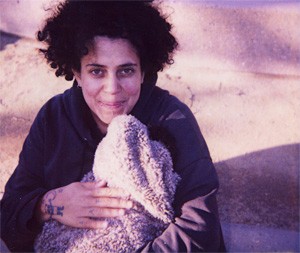 Kimya Dawson looks legitimately terrified. "I'm totally weirded out," she says to a sold-out crowd at a New York City club. "It's great that you're all here, but treat me normal," she announces to the audience, which is largely underage and entirely flush with adoration. "We're all friends here."

Yes, Dawson suddenly has a lot more friends. Too many, perhaps. The relentlessly childlike, cringingly sincere thirtysomething folk singer is the driving engine behind the Juno soundtrack, a recent No. 1 album. If you've not yet had the pleasure of the movie — an atrociously fey teen-pregnancy comedy barnstorming multiplexes and hogging Oscar nominations — by all means, go see it.

It's sweet, heartwarming, and winsome in its utter preposterousness. Just the fakest dialogue imaginable. Pop-culture-savvy sarcasm as suburban religion. Teenagers who talk like Hollywood screenwriters. "Cool" parents who talk like teenage screenwriters. A 16-year-old heroine who actually says things like "Just looking to secure a hasty abortion!" and "Just dealing with things way outside my maturity level!" and (grits teeth) "Swear to blog!" Just appallingly cute.

And there on the soundtrack, bobbing and weaving amid the obligatory "indie" blockbuster tunes (Belle & Sebastian, the Kinks), is Dawson — her primal, primitive songs about tire swings, vampires, and roller coasters goosing us along, her wobbly voice and furtively chicken-scratched, double-time guitar sounding like a terrified little kid who just ditched the training wheels and is now barreling down a mountain. This is Garden State territory, with all the fearsome backlash that entails.

Dawson is sheepish, guileless, and awkward in a way that you really can't fake — with loopy, yammering banter and jittery odes to not caring about whether or not she's cool. But you gotta divorce her from Juno. Even if you fall for the flick, it requires you to turn off that part of your brain governing skepticism, cynicism, and rational human conversation. It plays up Dawson's clunkiest, most aggravating tunes — particularly the grating "Loose Lips."

But Dawson's own albums are much tougher to shake off, particularly 2006's Remember That I Love You, the one Juno most frequently plunders. Just try speaking ill of "My Mom," when all that rushed, amateurish clunkiness turns suddenly devastating:

Looks ridiculous in print. No one else on planet Earth can sell that. But hearing Dawson bleat those lines can obliterate an awful lot of discouraging words. Her old group, the Moldy Peaches, was easy to dismiss as a bewildering art-school prank. But as a solo entity, who now lives in Seattle, Dawson has flourished by regressing even further.

Her live set hits its stride with a string of children's songs that sound like they were written by children. Farts are a major motif: There's an alphabet song in which E stands for "elephant farts," S for "stink," T for "turd," U for "uh-oh," and Z for "farts that smell like the zoo." The killer is "The Smoothie Song," in which a pregnant Dawson demands a smoothie, because she's scared that her unborn child hasn't moved in a while, and smoothies reliably create a sensation "like a fart in a tub inside of me." It's impossible to imagine anyone else singing that. Or Dawson singing anything else.

That you'd put this music on for pleasure is highly unlikely. Wrapped up in something as arch and as cloying as Juno, it sounds increasingly contrived by association. The film even reprises Garden State's much-loathed "the Shins will change your life" trick. But this time, it's hapless, living-in-the-past loser Jason Bateman raving impotently about Sonic Youth.

If you come to Dawson's music through this movie, the first step to increased enjoyment is to forget she was ever involved with it. The soundtrack includes both the original Moldy Peaches version of "Anyone Else but You" and the one used in the film, sung during the fade-out by stars Ellen Page and Michael Cera. The Peaches' rendition is tremendously cloying, but the one sung by two Hollywood celebs portraying impossibly cloying teenagers somehow feels much sweeter, much more honest, and much more real.

That music so unguarded and guileless might propel Dawson to some small semblance of "stardom" is somehow mortifying — to her especially. When her N.Y.C. club show ends, she instructs the audience to stand in a circle and hold hands. Cautiously, she shuffles out into the crowd and triggers a massive group hug, a mosh pit of reckless love. It's a strange but fitting attempt to use a very large crowd to protect herself from a very large crowd.