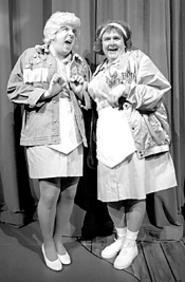 Here's your holiday lesson for this year, kiddies: Write a review the Cleveland Play House brass doesn't like and they'll jam a flaming yule log up your holly wreath. Arriving for the opening night of A Tuna Christmas was like walking into Christmas dinner just as volatile Uncle Peter dumps the punch bowl of eggnog all over another guest.

That's because, in a lobby filled with gaily decorated artificial trees, there was a posterboard with copies of blown-up letters. Each lambasted Plain Dealer theater critic Tony Brown for his cogently reasoned if wholly negative review of a recent Play House production of On Golden Pond.

The authors of those epistles were entitled to express their views, of course. But putting their words on prominent display was a childish and petulant move, which only underscored the Play House's bizarre and backward set of priorities these days. Instead of spending time figuring how to supersize documents on the Xerox and railing against critics, perhaps the artistic staff might be better occupied by looking for fare more challenging than Pond -- or their current holiday offering, A Tuna Christmas.

For the uninitiated, the Tuna plays (including the original Greater Tuna and Red, White and Tuna) are clichéd hillbilly burlesque dressed up as real, gol-dang theater. Nonetheless, the plays have become a thriving franchise for playwrights Jaston Williams, Joe Sears, and Ed Howard. They take a fictitious tiny town -- Tuna, Texas -- and populate it with a predictable gaggle of mouth-breathers, geeks, and non-threatening felons. Then they fertilize it with surefire Jeff Foxworthy-style material: the local little theater director laments, "I haven't had this many problems since my all-white production of Raisin in the Sun." Add some scraggly Christmas trees and a midget with big hair, and you've got yourself a ticket-seller, son. What you don't have is a play worth seeing, if your sense of humor has graduated beyond howling at "Don't grab the sheep there, that's why he charges!"

The only way to make this material soar is by handing it to relentlessly innovative comic actors (picture Jonathan Winters in his prime). Since only two actors play all 22 inhabitants of Tuna, it can be a wacky playground for performers who can leap from one outrageous redneck impression to another, have a gas in drag, and camp the hell out of it.

The Play House cast, however, isn't up to the task. Chuck Richie and Dana Snyder create about 31/2 differentiated characters each (if you're keeping score, that's 15 short), then reprise those vocal interpretations and physical mannerisms in the rest of their roles. Plus, the actors don't take nearly enough risks with the roles they do develop. Richie's appliqué-sweatered Bertha, a pivotal Tuna-ite, is bland as unseasoned grits. Snyder, as chain-smoking Didi Snavely (owner of the Used Weapons Store), settles for repetitious shtick instead of fresh attacks.

Among other shortcomings, director William Hoffman often lets the energy lag during costume changes. These are lulls that cry out to be filled with comic invention from the director, but dagnabit, there jes' ain't none.

In the interest of full disclosure, the enthusiastic audience seemed pleased as punch with the production. And hell, there are a few funny morsels here and there in this cracker barrel. But not nearly enough. And lest angry retorts to this review be posted or otherwise displayed in the lobby of the Play House's next production, the artistic staff may want to remember that theater critics review plays, not merely take the temperature of the audience. This explains why we don't put our critiques up for a vote and why we don't sit facing the opposite direction.

One has to believe there is hope for civilization when a play featuring an openly gay elf with a serious attitude problem becomes an annual holiday institution. But that's what appears to be happening with The Santaland Diaries, a sardonic one-person exploration into the netherworld of the department-store Santa Claus "experience."

Written by best-selling humorist David Sedaris, Diaries is a true-life tale of his season in Macy's Santaland, where potential elves were subjected to multiple interviews and psychological tests before being awarded their green velvet tunics and curly-toed slippers. As bad as the job is, the narrator considers it a step up on the employment food chain from handing out pamphlets on the sidewalk dressed as a taco.

Once installed in Santaland, the self-named Crumpet encounters vomiting children, snarky parents, mind-numbing assignments (pointing to an exit door for eight hours while smiling), and a mini-crush on the stud elf Snowball.

Beck Center's one-person show features Curtis Proctor as Crumpet, and from the moment he hits the stage, you'll be struck by the perfect casting. His elfin face and fast-twitch energy are ideally suited to pixiedom. However, this quality is also what prevents Proctor from plumbing the darker reaches of the script, where Sedaris's mordant wit really shines. And since Crumpet seems more irritated by his absurd situation than righteously pissed, the tender ending is less poignant than it could be.

Still, Proctor and director David Hansen deliver a crisp and engaging hourlong diversion that will go down well with anyone who has had it up to here with sappy Santa sentiment.

On the other hand, some heartfelt emotion is appropriate now and then, especially in a world bristling with heavily armed religious lunatics, power-mad leaders, and weapons of mass destruction. Amid all this Sturm und Drang, a play such as the current Actors' Summit production invites us to conjure up the true holiday spirit.

A Child's Christmas in Wales is a theatrical version of the short story by Dylan Thomas, which recounts one yuletide day from his youth. Even though the activities -- children opening gifts and frolicking outdoors, aunts and uncles swapping stories -- are ordinary, Thomas's sharp imagery ("birds the color of red flannel petticoats whisked past the harp-shaped hills") makes the mundane transcendent.

The Jeremy Brooks and Adrian Mitchell adaptation plumps up Thomas's compact story with tall tales, Welsh folk songs, and family anecdotes. Through turning this fragile childhood recollection into acting and singing bits, the pressure is on the players and director to make it come alive in a natural and affecting way.

But in this task, the Actors' Summit troupe is only partly successful. Peter Voinovich nicely balances his role as both Dylan the adult narrator and Dylan the wide-eyed boy while navigating the nuances of the poet's rhythms. And Paula Duesing and Wayne S. Turney are cozily comfortable as Dylan's parents, although Turney could be a little less determinedly winsome.

While some of the other players in the 14-person cast are either too stiff or too broad, the larger issue is that the pace of the production seems a half-beat slow. This makes the frivolity and spontaneity of the party scenes feel excessively choreographed.

By employing a realistic set design for the Thomas home, director Neil Thackaberry loses the feel of gauzy childhood memories, which are evoked so splendidly in the short story. Thackaberry also makes some other unusual choices: a fireman with an absurd Keystone Cops mustache appears at one point, looking as though he stumbled in from another play; and a hat, supposedly knitted by a doting aunt, looks more like an ungainly duffel bag.

Still, even though the performance is less than ideal, the indelible language of Dylan Thomas resonates, offering a rich if momentary holiday refuge from the real world.