Conceptual artists let go of the reins at the Lakewood gallery's closing show. 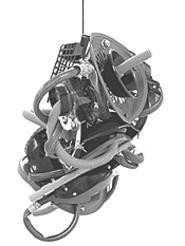 Sex, ashes, and a mysterious blood clot all converge in the final show at Dead Horse Gallery. It's a suitably eclectic parting shot from the Lakewood space, which, since its opening in 2000, has consistently showcased intriguing works by artists ranging from avant-garde musicians to middle-school students.

The show, simply named after the titles of its three submissions, features the latest work of conceptual artists Robert Thurmer, Terry Durst, and Blake Cook. The three area art professors here take off their instructor hats and focus on their own growth. It's a voyage through their imaginations, posing questions about hidden desires, death, and the value of material objects. These are challenging pieces about challenging subjects, and they're likely to send viewers off contemplating their own life circumstances.

In Thurmer's Vanity, the Cleveland State professor throws self-importance out the window: Each of his pieces is on sale for one dollar. That may sound like a great deal, but the fine print is worth reading. The works are set to undergo a minor transformation between purchase time and delivery: The artist will be burning each one, then handing the ashes to the lucky buyer. It's all part of Thurmer's desire to make room for renewal, his reaction to recently having turned 50.

Two rooms dedicated to his displays are filled with old works transformed into new knickknacks, as well as various ash drawings. In one space, three white curios house a series of manipulated old objects. A wooden log is painted gold and set upside down with a wheel attached to the bottom. On another shelf, a rusty old metal bucket, possibly taken from a water well, sits with its chain deposited inside. Elsewhere, an ax is the centerpiece of a carved wooden frame; closer inspection reveals a tag that reads "Go for it," fueling macabre thoughts of horror-movie violence. A book titled Problems With Aesthetics is nailed to the wall, impossible to open; even the author's name can't be seen. Clearly, the artist has reservations about theoretical definitions of art.

The larger room displays a number of Thurmer's drawings and bowls of cinders. "Vanity," his title piece, includes an upside-down garbage can lid filled with ashes and set on a pedestal, facing a drawing of a circular shape -- a literal symbol of his intent to burn the piece. The message of this humble enterprise is that by offering to destroy the fruits of his labor, Thurmer is the first to denounce his own work, questioning the value of art. His statement about creating space -- as opposed to filling it with frequently meaningless, dust-collecting objects like those found in the first room -- is refreshing, a far cry from the narcissism that plagues many artists.

The FCC probably wouldn't be thrilled with Splooge, the provocative installation by Durst. The title piece in this assemblage of hung sculptures is a blue hose, protruding upward from a circular red-and-black object, surrounded by pieces of garden hose and various other tubular phallic shapes, each dangling at about eye level. Three rooms feature eight colorful creations hung from the ceiling, a collection of playful pieces that alternately hint at and ooze sexuality. Other works by Durst include a paint-by-numbers picture of a cat, framed in purple plastic and augmented with gold lamé and a Barbie-doll leg, and a whimsical toy car that is steered with a red baseball bat. The Tri-C professor, best known for his carved-wood wall hangings, here has successfully reshaped found objects into fascinating curiosities.

Cook, also from Tri-C, conjures more confusion than anything with his installation, Anticipating Our Reunion via Blood Clot. He filled the small room with thousands of mostly flat, unassembled boxes, stacked high on top of each other. Facing the entrance, at floor level, is a hollow space carved through the "wall" of cardboard, along with the shreds that resulted from the sawing. Traces of red "blood" taint the cut-out area. It could be that "surgery" has occurred to remove some type of growth, or that negotiating the narrow corridor formed by the stacks is akin to a blood clot in an artery. While Cook's work effectively causes an overwhelming sense of entrapment, it might also be considered a prime candidate for Thurmer's recycling program. Alas, the building's owner promptly took care of the problem: Deeming the boxes a fire hazard, he had the piles removed during the February 27 opening reception. Only traces of the dirty boxes remain, along with a photograph of what was.

Gallery owners Kim Schoel and Mindy Tousley are closing shop, partly because of hard economic times, partly to pursue their own art. This final show may be considered a sort of farewell dinner, and a well-balanced meal it is: Cook's boxes are the enormous, rare steak that's a challenge to digest; Thurmer's art-to-ashes is the vegetable that's good for you -- and the elimination process. That leaves Durst's fantastical and sexy inventions as the alluring dessert -- one that's best not actually consumed with food.