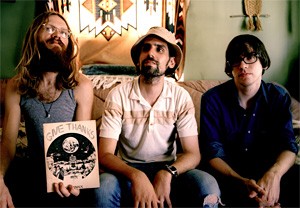 Tree-related metaphors in music usually crumble like a pile of dead lumber — "roots rock," "branching out," The Joshua Tree. But for the psychedelic rock trio Dead Meadow, a walk in the woods wound up providing the perfect analogy for its latest album, Old Growth.

"We were in the Redwoods [National Park]," recalls drummer Stephen McCarty. "And something about the phrase 'old growth' just seemed right to us, based on where we're at and our whole sound — the way [the album was] progressing."

Old Growth, Dead Meadow's fifth album, was recorded last year at Hollywood's legendary Sunset Sound Studios. To say it was made in the middle of a transitional phase would be a considerable understatement. First and foremost, Dead Meadow had just become an L.A. band, having made a bold migration from its longtime home base of Washington, D.C. Second, guitarist Cory Shane had been let go after 2005's Feathers, reducing the group's lineup back to the trio of McCarty, bassist Steve Kille, and singer-guitarist Jason Simon.

Dead Meadow's sound, brilliantly illustrated by the new CD's title, is a modern spin on the major building blocks of heavy, psychedelic rock and roll. The band's influences have been blatantly obvious across its decade-long career: There's the fuzzed-out blues-rock of Led Zeppelin and Black Sabbath, Pink Floyd's psychedelics, and Spiritualized's mystery and reverb. But by stirring all these ingredients into the same pot, Dead Meadow has crafted a brand-new texture to its music.

"I still listen to Zeppelin and Hendrix all the time," says McCarty. "But having done this for a while now, we're ready to branch out into more things and see how we can weave that into the sound we've already got. I think a lot of that shines through on the new record with the different instrumentation. It's got a lot more clarity."

Recording at Sunset Sound certainly brought historical perspective to the project. "The room that we got to use was actually the last one that all four Beatles performed together in," recalls McCarty. "There are some wonderful, haunted rooms above the area where Prince did Purple Rain, where Jim Morrison apparently used to hang out. It's just so rich with the history of all the musicians who made records there."

One listen to Old Growth cuts like "What Needs Must Be" and "The Queen of All Returns" reveals that some rock and roll ghosts were possibly in the studio during the album's recording, serving as muses. But there were other influences too, says McCarty: "We were definitely trying to get more of a live kind of feel, so we played all the basic tracks together, which is something we hadn't really done before."

Frontman Simon continues his evolution as a songwriter on Old Growth, experimenting with pop melodies ("I'm Gone"), Black Keys-style blues riffing ("Between Me and the Ground"), and — like the great psychedelic acts of yesteryear — Indian and Middle Eastern music ("Seven Seers").

"We definitely listen to a lot of Indian ragas and Tuvan throat singing," says McCarty. "It's very inspirational. And even though it's hard to pick up those instruments and delve into their whole, rich musical history, it's a really great texture to be able to add. There's just so much to learn from that."

With Kille playing the sitar and McCarty infusing Eastern percussion rhythms, Old Growth captures Dead Meadow's skill and versatility better than any of its previous records — without sacrificing the band's connection to psych-rock. "When we're working on songs, we give each other a lot of room in our own spectrums," says McCarty. "There's always plenty of room to push your own envelope — whether it's rhythmically or on bass or guitar or vocals. I feel like we've got a good division of labor that way."

It's no surprise that McCarty is often compared to John Bonham — it's to be expected with a skilled drummer who plays in a Zeppelin-esque band. But it is surprising to hear that McCarty actually ranks a very different, sometimes overlooked pop and rock percussionist as his personal fave.

"Ringo really wrote songs with the drums," he says, bowing to the Beatles' skin man. "He played them as a totally musical instrument. Even though there are times where he's doing stuff that's unbelievably technical, you never feel like he's showing off. I love John Bonham, but he did a lot of stuff that was like, 'Hey, check this out!' Meanwhile, there's Ringo, just doing his selfless but sensitive thing."

That said, if you're expecting some "Yellow Submarine"-like ditties from Dead Meadow, you're barking up the wrong, um, tree. But rest assured, there are still plenty of twists and turns at the group's concerts. "Every show we play is different," says McCarty. "It's really about seeing music get born in real time, as opposed to being something you can stop and analyze."